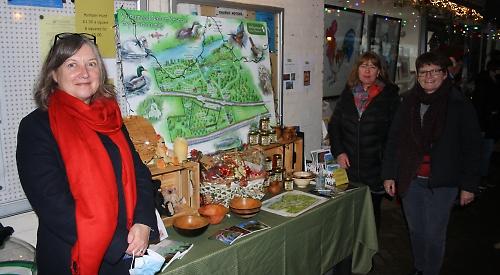 HUNDREDS of people attended a Christmas celebration at Goring arcade.

Shops including Inspiration and Reeds Art and Framing opened late for the event on Friday.

The Village Hub, a charity which offers community support to the village, hosted Santa’s grotto and sold photos of visitors with Father Christmas to raise funds. Volunteer elves directed families queuing outside.

The Hub also ran a raffle with prizes from the Goring Grocer.

The Goring fire crew had brought their engine and parked it outside the arcade for children to sit in.

The Village Café had a barbecue selling burgers and hot dogs and Goring Village Butchers had a hog roast.

Esme Roberts, 15, was selling her Blue Wave jewellery, which she has been making since the first coronavirus lockdown last year. Christmas songs were performed by Stephanie Bockworth.

The Withymead Nature Reserve had a stall and ran a raffle where people could buy squares on a map of the reserve to try to find the prize of a Christmas hamper.

It was also selling Withymead honey, which is made by one of the reserve wardens, and sold cards with wildlife photographs by Simon Booker, who is also a warden.

Golf HR was giving out Prosecco and mince pies and encouraging people to take an employment law quiz to see how much they know about their rights.

Melanie Meads, who chairs the trustees at the Hub, said: “It has been a tough year so it’s lovely to get the village out for Christmas.

“I was so pleased with the grotto — there was a great long queue out of the arcade. We made it as socially distanced as we could and we all wore masks.”

Dee Singleton, who owns Reeds Art and Framing, which opened in September, said: “It’s a great evening because we’ve got new people coming in and introducing themselves.

“My children are volunteering as elves at the Hub so it’s a real family affair.”

Ron Bridle, who had a stall selling his new wildlife calendar in aid of environmental causes, said: “This is always a great evening because people who come to this don’t often visit Goring’s shops.

“It’s good for visitors to come and see the very wide range of shops that we’re lucky enough to have here.”