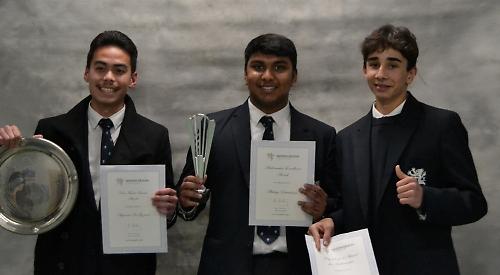 The secondary school in Reades Lane held its annual presentation to celebrate students who have excelled.

Year 11 pupils from last year were welcomed back to receive their GCSE certificates and prizes.

Between each prize-giving, deputy head Emma Bliss told the audience of parents and staff about what is taking place at the school.

Students also spoke about what they love about the school.

The evening ended with the speech by Sam Townsend, who left the school in 2002 and went on to win bronze and silver medals in numerous world championships and competed at the 2012 and 2016 Olympic Games before retiring.

Headteacher Andrew Hartley said: “Sam’s speech was truly inspirational and he made two very clear points, to make the most of your opportunities and talents and to try your absolute best at all times.

“Sam’s journey from a local state comprehensive to the pinnacle of a sport dominated by independent school students showed what can be achieved with discipline, effort, listening to the support you’re given and reflecting and moving forward when things don’t work so well.

“Sam’s speech received a rousing round of applause and it was a fitting way to conclude the evening.

“The hall was very busy and it was lovely to see so many families in attendance celebrating all that is great about the school.”

The award-winners were as follows:

Chef of the year: Kimi Buche.

Service to the school: James Blackall and Hibbah Ahmed.