Memorial for man who led ‘Save Townlands’ campaign 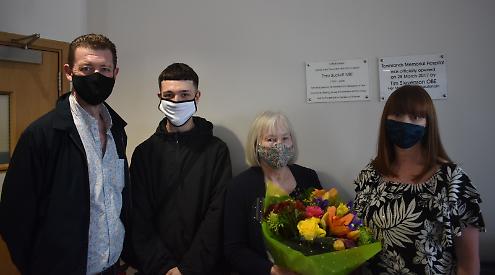 A PLAQUE dedicated to a former mayor of Henley has been unveiled at Townlands Memorial Hospital.

Terry Buckett led the action group which campaigned for the old Townlands Hospital to remain open.

The Save Townlands group organised a march around the town in 2005 and delivered a petition with 11,800 names to then prime minister Tony Blair at No 10 Downing Street.

The campaign succeeded and led to the hospital being totally rebuilt in 2016.

Mr Buckett, who was a postman, served as a councillor from 1995 until his death in 2009 and was Mayor twice.

His widow Pauline, who served as a councillor after his death, unveiled the plaque during a small ceremony in the hospital’s reception area with current Mayor Sarah Miller.

Friends and family of Mr Buckett attended together with former mayors and councillors who had worked with him.

Jeni Wood, a former mayor who now lives in Peppard, said: “Terry was an extremely kind man. Anything you wanted to know about Henley he would tell you. The work he did for the hospital was so necessary. We wouldn’t have had anything without it. It’s such a godsend not having to go all the way to somewhere like Reading.” Her husband Barry, also a former mayor, described Mr Buckett as “a tower of strength” in the action group.

Councillor Ken Arlett, a childhood friend of Mr Buckett and also a former mayor, said: “He was an excellent town councillor. I think being a local lad helped in that regard. He was very hands-on.”

He thanked Susan Dougall, senior property manager at NHS Property Services, who helped with the plaque’s installation, saying: “You’ve made a lot of people, especially Terry’s family, very proud and we all appreciate what you have done.”

Mrs Dougall said of Mr Buckett: “Without his work, without his dedication, I don’t think this hospital would be here.” Mrs Buckett said: “I’m very proud to see the plaque unveiled. We all worked so hard to save the hospital and this marks that. I’m not sure what he’d have made of it if he was still alive. I think he would have been a little embarrassed.”

Mr Buckett worked as a postman for more than 30 years and was made an MBE for his services to Royal Mail in 1998.

After his death, he was given a full civic funeral by Henley Town Council which 600 people attended.