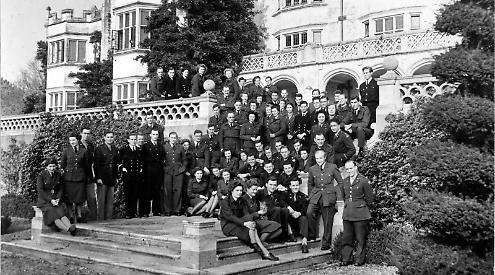 ONE of the last remaining Bletchley Park codebreakers will be guest of honour at Danesfield House Hotel as the former RAF base celebrates its part in the Second World War on the 77th anniversary of VE day.

From 1941 to 1977 the hotel was RAF Medmenham, home to an intelligence section specialising in photographic analysis described as the “eyes” to Bletchley Park’s “ears”.

Next weekend (May 7 and 8), the hotel is to host a series of events for residents and lunchtime guests. This includes talks from bestselling authors of wartime stories, RAF veterans and volunteers from Bletchley Park.

The highlight will be 99-year-old Charlotte “Betty” Webb, the last codebreaker from Bletchley Park, who will be part of a question-and-answer panel.

Awarded an MBE and Légion d’ Honneur, the highest French order of merit, Mrs Webb will also talk about her book Secret Postings.

She said: “It will be so good to be in the building which housed the RAF photographic intelligence personnel who played such a vital role in combating our then enemies.

“Bletchley Park is said to have shortened the war by two to three years.” A coding room museum will be set up for the weekend by the RAF Medmenham Association, and Bletchley Park.

Association chairman Paul Stewart said: “Without RAF Medmenham we would have been blind to Nazi Germany’s plans.

“The intelligence that was produced at Danesfield House was critical to our success in the war.”