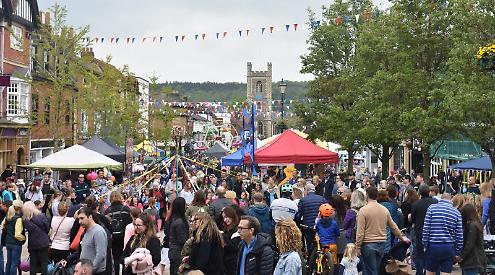 The annual celebration in Market Place had not been held for two years due to the coronavirus pandemic.

Mayor Sarah Miller opened the event, which was themed around the Queen’s Jubilee, and she was delighted to see so many residents turn up.

“After a two-year break, it is so lovely to see you all here once again,” said councillor Miller. “Let’s hope we never have to cancel this wonderful event ever again.”

Crowds gathered by the foot of the town hall for the May pole dancing display, featuring children from Steph's Dancing Divas and Dudes performing arts school.

The Ellington Morris group performed traditional dances, including a celebratory dance around councillor Miller known as ‘The Maid of the Mill’ to thank her for organising the fayre.

The Laughing Ants jazz-fusion band played music throughout the day, with stilt-walkers and fairies from the Enchanted Players Theatre Company entertaining children.

The traditional tug of war was cancelled due to a lack of participants, but any disappointment was averted when the Mayor performed a Henley-themed sea shanty she had written herself.

For the full story and more pictures, see this week's Henley Standard.