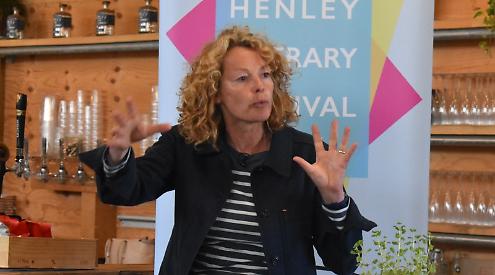 KATE HUMBLE treated guests to a bowl of soup from her new cookbook when she gave a talk in Binfield Heath on Wednesday last week.

The TV presenter’s “spring in your step” soup, which is made from nettles, kale, spinach and leeks, was served to guests following the Henley Literary Festival pop-up event at the Bottle and Glass Inn.

It is one of the recipes from her book, Home Cooked: Recipes From The Farm, which she spoke about with fellow presenter Beverley Turner.

Mrs Humble said the book was not “technical” but focused on simple and comforting dishes inspired by her childhood in the Welsh countryside.

She said: “I grew up in the countryside in the dark ages. By that I mean the Seventies. If you didn’t cook, you didn’t eat. The importance of good home cooking was taught to me at a very young age.

“When I first suggested the idea of a cookbook to my agent, she told me it was mad. ‘There are a million cookbooks,’ she said, ‘and you know nothing about food’.

“But I managed to pull together some recipes that my mum had made for us growing up and she begrudgingly admitted it could work.

“One of those first recipes was the soup. It’s a real honour to watch people eating food straight from the pages of my book.”

Harriet Reed-Ryan, events director of the festival, said: “It was great to have Kate talk about her new book, especially in such a lovely venue.

“I spoke to her afterwards and she said how much she enjoyed it. She spent so much time talking to people after the show.”

The Bottle and Glass Inn will be hosting another talk on June 6 with bestselling authors Melissa Hemsley and Laura Brand.