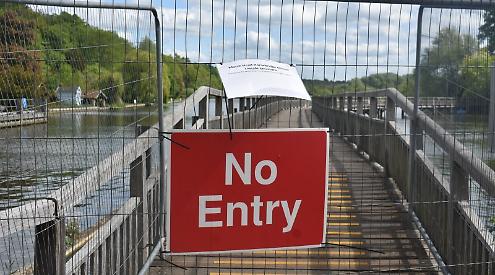 A PEDESTRIAN bridge in Henley has been closed due to safety concerns.

The Environment Agency shut the Marsh Head Horsebridge at Marsh Lock for emergency repairs on Friday following complaints about its condition.

Part of one of the handrails had fallen off and many of the wooden planks that people walk on had become loose with gaps forming between them.

Metal barriers have been installed at either end of the bridge with “No Entry” signs alongside a notice warning that the structure is “unsafe”.

The bridge, which forms part of the Thames Path and is used by thousands of people each year, could remain shut for two months. While the closure is in place, walkers will have to cross the busy A4155, which has a limited pavement, and divert through Harpsden and Shiplake before rejoining the Thames Path.

The Remenham Angling Society Henley Waters’ season, which starts next month, will be affected as its members fish at Cottage Reach, above Marsh Lock.

The Henley and Goring Ramblers have an Oxfordshire-wide event on June 26 with walks that were due to use the bridge.

Town councillor Kellie Hinton, who has been liaising with the Environment Agency, said immediate repairs were essential.

She said: “The agency has had some complaints about safety. One of the handrails has come off some of the planks under your feet have 4in gaps between them — a toddler’s foot could go through there.

“The primary concern is safety. Alongside the immediate works, the agency will be reviewing a structural survey it undertook in 2019 and updating this with a view to arranging long-term work that may be needed.

“This will not be done at the same time as the emergency repairs but is on the agenda for the future. Better safe than sorry.”

Cllr Hinton said the bridge was likely to stay closed in May and June.

She said: “It will take at least three weeks to get the permissions and the paperwork done and then, once it’s done, it will all need to be checked over before it can be allowed to re-open.

“The agency is looking into whether a diversion route will be needed. When the bridge closed for three months in the early 2000s there was a diversion through the private lane that runs off Mill Lane so I’m sure a solution can be found if everyone works together.”

Andrew Crook, who runs the angling society, said he was disappointed that remedial work was not carried out three years ago when the structural survey was carried out.

Alie Hagedoorn, who chairs the Henley and Goring Ramblers Association, was worried about walkers crossing the A4155 if no diversion is put in place.

She said: “It is very, very unfortunate that this has happened.

“I understand that something happened to the footbridge and it is unsafe and they have had to close it.

“But I hope that it is possible to find a diversion because it is really unsafe to walk across the main road in order to bypass it.

“I have contacted my footpath officer to see if they can work with local authorities and see if a bypass can be found because, I suspect, it will be several months before the bridge can be fixed and re-opened.

“A lot of people use the footbridge as it is part of the Thames Path and we have an event at the end of June where many people from the whole of Oxfordshire will come to this area.

“We are hosting the event with six or seven groups and most of the walks would go via Marsh Lock.

“The footbridge is used by so many other people as well so we really should try to get a diversion in place.”

Kate Ashbrook, secretary of the Henley-based Open Spaces Society, said: “The proposed diversion is very, very long, about three miles — a whole walk in itself.”

She said it would helpful to have a short diversion using a short stretch of the private land.

“The other thing the agency could do is provide a ferry to take people round,” she said.

“We accept that there are emergencies but they need to realise that it is part of a national trail and we are going into summer time and it will be very busy.

“They could provide a ferry there and it could all be quite fun.

“As it is, the proposed diversion is dreadful and a lot of it is along lanes and not footpaths.”

Meanwhile, the Environment Agency has come under fire for closing a section of moorings in Goring close to the lock.

Tony Riley, who chairs the Association of Thames Yacht Clubs and is on the committee of the Thames Motor Boaters Association, called the move as “sheer stupidity”.

He said: “Below Goring Lock is a set of moorings that extends for some distance and allows people to stay for 24 or 48 hours but the Environment Agency has decided to close these from May 19 to June 30 to carry out towpath remedial work and resurfacing.

“These moorings are very, very popular and we are approaching the high boating season and this will have an economic impact in that the boaters would otherwise spend their money, which is not insignificant, in the village.

“There are three or four pubs and a couple of shops in Goring that will miss out on custom, which is sheer stupidity and rank incompetence.” This work should have been done during the winter works programme, which should have finished at the end of March. We were aware that this was going to overrun.

“A notice went up last Thursday which said people should seek alternative moorings locally but there aren’t any that are sufficient.

“They have got themselves in a health and safety tick and are obsessed by it. I do not believe there has been a deterioration in the last year or more yet this must be done by the day before yesterday.

An Environment Agency spokesman said: “The safety of the public and our staff in and around our rivers is paramount. We carry out safety checks and refurbishment work on all the structures we own.

“Marsh Lock Bridge is closed while we decide what immediate work is needed. The checks are also part of our long-term maintenance programme.

“The towpath downstream of Goring Lock needs to be resurfaced now to keep it safe for users and a diversion will be in place.

“We appreciate these closures may cause inconvenience but ask for the public’s patience while safety checks and work at both locations are carried out.”