Festival is more popular than ever after pandemic 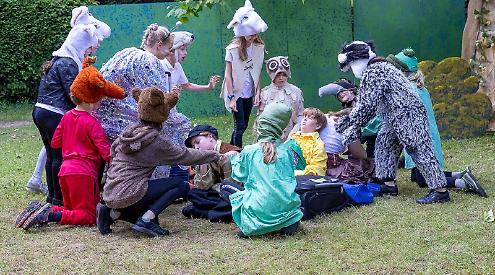 WARGRAVE Festival has got off to a fantastic start, say the organisers.

Returning this year after an enforced two-year absence due to the coronavirus pandemic, the 19-day event began last week with performances of Shakespeare’s The Tempest over four nights.

Festival chairman Cath Forsaith said: “The actors, costumes and performances were wonderful. It was just brilliant and everyone said there was a great atmosphere.”

Over the weekend there were popular events including a performance of Shakepeare’s As You Like It on Saturday by 30 children aged eight to 14.

There was also a history exhibition, a guided history walk around the village, a Fun on the River day and a Brass on the Green event in the vicarage gardens featuring the Blue Sky Big Band.

Ms Forsaith said: “People brought picnics along and sat on the grass enjoying the wonderful music.

“The festival is going really well. The weather is looking wonderful and everyone is coming together. It’s going fantastically.”

On Monday a large marquee was set up on the village green ready to host further events, many of which are already sold out due to the huge demand for tickets.

Ms Forsaith said: “It has been the best year for ticket sales. After cancelling last year because of covid we were worried how people would respond but decided we would take the risk. But we have never had so many sold-out events. We had the best ticket day ever and have been selling tickets online for the first time this year.”

The biannual festival has been running since 1975 and is a not-for-profit event with every penny raised going to community organisations to improve the quality of life in the village through education, sport and culture.

The theme of this year’s festival — the 23rd — is “Summer of Love” to reflect how villagers looked after each other during the pandemic.

Tickets are still available for many of the family events and theatrical and musical performances while others are free to attend.

A new event taking place tomorrow (Saturday) is Bikefest. Aimed at families, it includes an adventure ride around Warren Row and Crazies Hill where participants collect clues at checkpoints. There will also be 50km and 75km rides through the Chilterns.

Other popular events are the variety show next Saturday (June 25), which is a kind of Wargrave’s Got Talent where anyone can do a turn, and follows the village fete and parade.

Ms Forsaith said: “There is still so much to come — Gin on the Green, where there will be lots of craft gins to try, a Songs from the Shows night and a comedy evening as well as lots of other events, some of which don’t need tickets.

“We try to have a balance of events that you have to buy tickets for and others that are free just to get people together, especially after covid. Just seeing people talking to each other and enjoying themselves makes such a difference.”