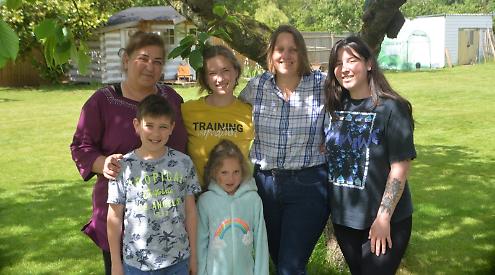 A WOMAN from Kidmore End has taken in a family of six refugees.

Kristina Stitt and her husband Huib are hosting three women and three children at their house on Chalkhouse Green Road.

Mrs Stitt, an administrator at St Michael’s Church in Sonning Common, was put in contact with the family by Rachel Head.

She said: “I heard on the news about the government scheme and that was when I joined the WhatsApp group run by Rachel.

“Rachel had been in contact with Veronika and her family via Facebook. I told her I had three spare bedrooms and she told me about this family of six. I said ‘Sure’ as I didn’t want them to be split up.”

The family lived in Kharkiv, about 30 miles from the Russian border. They left the city on February 25 following the Russian invasion and travelled to Poland by train and car.

On May 10 they flew from Warsaw to the UK, arriving at London Stansted Airport.

Mrs Stitt said: “The family are delightful. There are effectively three generations of them. They are very supportive and can cheer each other up when there is bad news from home.

“My husband plays with the children and I have been cooking with the girl, Marharita. We have made cookies and brownies and we made bread the other day with her grandmother Svitlana.

“I have struck up a real bond with them all and I adore the children. They all speak English to varying degrees. We have had to get by using Google Translate. The biggest struggle is getting English lessons for them.”

She said: “It’s been made so much easier because Rachel has organised such a large group of people to provide anything that’s required.

“It has been a huge help to have that community support network. Trying to do this on your own is quite daunting.

“All the way along you’ve had someone to support you. If you’re worried about one of the forms, or a visa, there’s always someone to help.

“Anything I’ve needed, like bicycles or toys for the children, we’ve just put a message out on the WhatsApp and had responses almost immediately.”