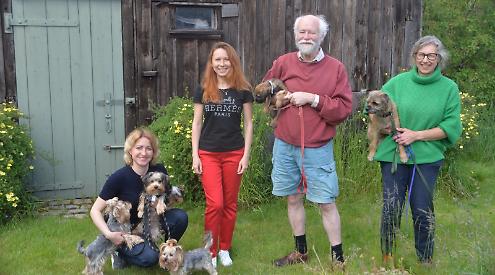 A UKRAINIAN woman is living in Gallowstree Common with her four dogs.

Anfisa Vlasova travelled across Europe with an entire family of Yorkshire terriers, including a grandmother, mother and two puppies, to escape the conflict caused by the Russian invasion.

Ms Vlasova, 40, is now living with Jane and Rev Dr James Mather, a semi-retired minister, who have two dogs of their own.

She said: “The dogs love the English countryside as they can run around and have lots of fun. They also get on with Jane’s dogs.”

Ms Vlasova lived with her dogs, Nora, Betsy, Daisy and Teddy, in a flat in southern Kharkiv but was forced to leave when the city became a target for Russian shelling.

She said: “It was a nice place. I was really happy in Kharkiv as all my friends were there. I didn’t want to leave. At one point none of the houses had windows. The shells had destroyed the markets and the shopping malls.

“You end up compromising with life under shelling. The first time is scary but after a while you get used to it. It’s like, ‘Bomb — let it be’.” Rachel Head found about Ms Vlasova through a contact in the village and started arranging for her to come over to the UK as well as organising a host.

Mrs Mather, who has two border terriers called Dora and Tilberthwite, said: “I knew I wouldn’t be able to host a family as we just don’t have enough time. Then Rachel told me about this woman who had four dogs and I thought, ‘Great, we’ve got dogs ourselves and lots of space’, so it was a perfect match.”

Anfisa left her home on April 7 with her friend Alyona Kodan and her daughter Alina, 18, who had a dog and a cat themselves.

The three women took the bus to Lviv and on the way met Tetiana Shestachenko and her 10-year-old son Maksym, who were also escaping the conflict.

Ms Head said: “Anfisa sent me a photo with this boy in the background with his thumbs up. I asked where they were going and Anfisa said they didn’t know.

The group travelled to Poland, where Mrs Shestachenko and Maksym were able to fly to the UK.

Ms Vlasova, Ms Kodan and Alina stayed in Poland for a month before taking a 30-hour coach designated for transporting animals to the UK.

Ms Kodan and Alina are now living with Mrs Mather’s parents in Dunsden.

Mrs Mather said it wouldn’t have been possible without the work of Ms Head.

She said: “What Rachel has done is almost superhuman. You hear about people doing these extraordinary things but you rarely get to see it first-hand. She has given the whole thing some leadership.

“I think back to that first meeting and we were all like jellies. It was Rachel who got us talking and formed the network. It was Rachel, Rachel, Rachel. Without her, we would have been totally overwhelmed. She has got just as strong a relationship with the guests as us hosts do.”