Mucking about in boats at return of annual rag regatta 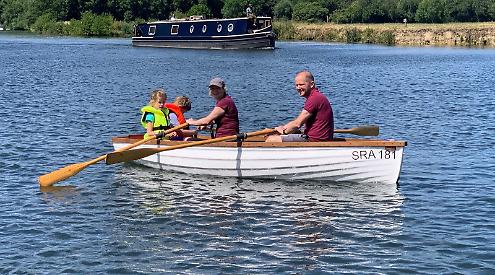 ABOUT 70 people took part in the Wargrave rag regatta on the River Thames.

The event, held at Wargrave Boating Club, has not taken place for the last two years due to the coronavirus pandemic.

Many families were among those competing in about 65 races in dozens of categories, including Canadian canoes, skiffs and dongolas. There was also the Bull Enduro kayak race, where adults drink half a pint of beer at the Bull in High Street before paddling back down the course.

About 40 adults took part in this, which was won by James Carver and Caroline Simmonds. Its junior version, the Anne Reid Enduro has the children run to the end of Ferry Lane and drink a glass of squash.

Club chairman Johnny Wyld said: “The overhead conditions were beautiful but there was a bit of a crosswind which blew the boats on to the banks, which made paddling more difficult.

“The Canadian punting was once again great fun as it is, let’s say, a very wet event while the scratch dongola races are always interesting as it’s for people to have a go.

“It continued to be a fantastic event for families and it was great to get out on to the river after the last couple of years and we had three new families who experienced the rag regatta for the first time.

“As a result of the pandemic we lost the momentum we had in having family memberships where we weren’t able to race or be open and the regatta was great for people living near the water to be able to come and just enjoy mucking about in boats, which is what it was all about.”

The results were as follows: Side-by-side dinghy (under- nines): Rory Harris and Freya Hall

Adult and child (nine and under) Canadian canoe: Charlie Carver and James Carver

Bull Enduro (18 and over): James Carver and Caroline Simmonds

Anne Reid Enduro (10 and over): Oscar Wybrow and Molly Hall

Sit-on kayak (16 and over): Emily Harris and Samuel Wybrow