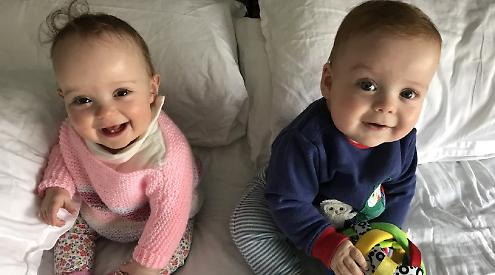 A MAN has produced a children’s book based on the beard he grew during the coronavirus lockdown.

Neil Grant wrote A Spider Lives in My Dad’s Beard after growing his facial hair while working from home during the pandemic.

Now he has self-published the book, which tells the story of a loveable spider who helps a father bond with his son.

Mr Grant, 44, who lives with his wife Emma and 11-month-old twins Louis and Bow in Caversham Heights, said: “It all began with the beard. It was the beginning of the first lockdown in March 2020.

“I’ve always been one of those people who wanted to grow a beard but didn’t want to be going to work in that first stage where it’s all a bit scratchy.

“I’d never grown it beyond stubble before so when lockdown started, I thought I’d give it a go.” He came up with the idea for the book while admiring his new look in the bathroom mirror.

Mr Grant said: “I saw a spider dangling from my beard and thought it that would make a cool story. Being a creative person, I’m always having ideas for films and books. I’m always driving my wife mad bending her ear with them.

“We went on a lot of lockdown walks together around Caversham and out towards Mapledurham.

“On one of these I started bending her ear again, saying: ‘I’ve got this idea for a children’s book, it’s about a spider who lives in a man’s beard’.

“She was totally fed up with me telling her all these ideas about the things I was going to do. She just told me she didn’t want to hear any more ideas and I should just do it. I had all this spare time as it was lockdown and I wasn’t commuting so I just thought I’d crack on — partly to show her, I think.

“I got in touch with an illustrator — I went through a few and finally I found this chap. As soon as I started working with him, it meant I had to see the project through.

“I wanted the illustration to be quite modern but still have that innocence and he captured that.

“When I saw his images, I started getting more excited about it all coming together.”

The only thing missing then was the “Dad” of the story but then fate intervened.

Mr Grant said: “We’d been trying to have a baby for quite some time and about halfway through writing the book Emma became pregnant.

“The pregnancy kept me going. We’ve got lots of nieces and nephews but then I knew there would be someone to share this story with. It’s strange. It’s almost like the book was coming true. I was suddenly a dad with a beard just like the character in the book.

“The illustrator had also drawn this red-headed boy and then I had a little red-haired boy. The book was coming to life.”

A Spider Lives In My Dad’s Beard is on sale in Fourbears Books and House of Cards in Caversham and the Bell Bookshop in Henley.

Mr Grant said: “When you’re self-publishing it’s hard letting people know the book exists but everyone who has bought it really likes it.

“The twins love it — they give it five stars! Their favourite bit of the story is when Spider plays the drums and causes a big din.

“I’d love to do this full time. I’ve got lots of other ideas for follow ups, so it would be a dream if I could do it as a career.”