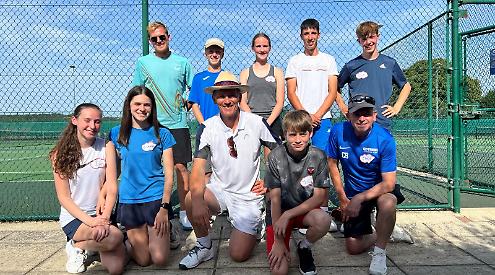 ABOUT 85 people took part in a free event at Wargrave Lawn Tennis Club.

The club, which is based in Recreation Road, hosted a Big Tennis Day with a focus on having fun with the whole family.

There were coaching sessions, games and a competition as well as music and a barbecue.

There would have been more in attendance were it not for weather warnings of extreme heat on the day, with many  cancelling due to the weather.   Despite this, chairman Michael Simpson declared the day a “huge success.” He said: “I was delighted with the turnout. There was such a great atmosphere and it seemed like everyone had a lot of fun.

“It was such a hot day that some people were unfortunately put off although it actually didn’t end up being too bad so it was a shame they missed out.

“Events such as these are so important, as they show that tennis is accessible. Many people have an idea of tennis clubs as stuffy old places, but we wanted to break down that perception. We had anything and everything on the day, with people of all skill levels showing up. All eight courts were busy throughout the day.”

The event was part of the national Big Tennis Weekend campaign promoted by the Lawn Tennis Association, to encourage people to head to their local tennis courts for free.

Johnny Coombes won the competition to find who had the fastest serve, hitting 70mph on the speedometer. Players praised the club for organising the day. Eva Bittermann said: “It was very well planned. We got to play in small groups, play different games and learn some new techniques.

Liam Pidgeon said: “Fantastic facilities and a really friendly club. It’s family-friendly with lots of kids playing. It’s bringing the young generations through, as well as the old fogeys like me who hadn’t played in 30 years.”

Mr Simpson said the club had received an influx of new members following the event.