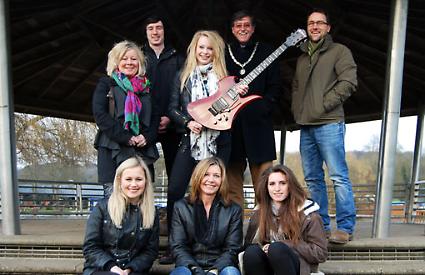 YOUNG musicians are being invited to perform at a festival in Henley this summer.

The second annual Music on the Meadows will be held on Mill Meadows on July 20.

The festival will be headlined by Beatles tribute act The Razzles and Henley singer Jayson Jaurigue. They will end the day with singalong performances of Beatles songs.

The festival will begin at noon with acoustic jazz and folk music and will move to rock and pop performances in the evening.

Henley singer Jamie Bruce, a former finalist in BBC talent show The Voice, will compere the event with singer Mollie Marriott, the daughter of Small Faces frontman Steve Marriott. The pair judged a battle of the bands contest last year.

There will be food and drink stalls, face-painting, temporary tattoos, a bouncy castle for adults and inflatable fairground games for children.

Stylists from La Medusa in Station Road, Henley, will set up a temporary salon and will offer elaborate hair sculptures in exchange for donations.

The festival will be raising money to set up a youth drop-in centre above Magoos in Hart Street. Called The Listening Roomz, it will be run in partnership with Riverside Counselling.

Magoos, which sponsors the festival, will also host a series of free music mentoring nights on June 11, 18 and 25 and July 16. Some bands who are appearing at the festival will be playing but the gigs are open to any young artists who want experience of playing live.

Mr Jaurigue, who runs talent agency Eight Ray Music, will be there to give feedback and advice.

The festival is organised by a committee made up mostly of young people who are overseen by adults. It was set up in honour of late Beatle George Harrison, who lived at Friar Park in Henley until his death in 2001.

Committee member Maggie Atkinson, who runs the Be There Henley youth project, said: It is very much by the young people, not just for them.

Musicians who want to play at the festival or the Magoos evenings, or businesses wanting to sponsor the festival, should call Mrs Atkinson on 07875 203409.