Neighbours get together for street party 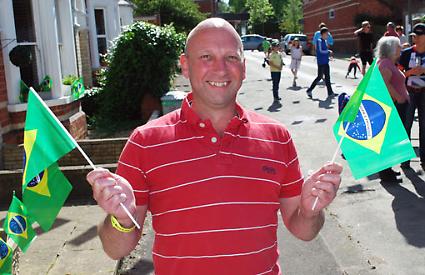 A STREET party with a World Cup theme took place in Henley on Sunday.

About 75 residents gathered in Marmion Road, which was closed to traffic and had been decorated with flags.

They sat at tables in the road to consume food and drink while Overheated Pilots, a band from South Wales, performed.

Paul McSweeney, 34, of nearby Grove Road, organised the event with neighbour Claire Beard, 43.

It was the fourth year running a street party has been held in Marmion Road.

Click here to view our picture gallery of the event.

In 2011, residents celebrated the wedding of Prince William and Kate Middleton, the following year it was the Queens diamond jubilee and last year a party was held to mark the 60th anniversary of the Queens coronation.

Mr McSweeney said: Its a once-a-year opportunity to get out and spend time with your neighbours and were lucky we all get on so well. Hopefully well do it again next year if all the residents are happy to keep it going.

The World Cup theme was trying to introduce the various nationalities and a bit of colour to the party.

We were very, very lucky with the weather  on Saturday and Monday it was horrendous. In fact, weve had sunshine every year so were overdue a wet one but we got away with it this year.

This years event raised more than £200, which will be donated to childrens hospice Helen and Douglas House.