CIGARETTE smokers in Henley have been told to stop throwing their butts on the ground.

Kellie Hinton, who chairs the Henley in Bloom committee, hit out after the annual Hit Litter day in which volunteers helped clean the streets.

She said discarded cigarette butts, which cannot be recycled, were a particular problem.

“We need to get people to stub their cigarettes out and then throw them away in bins,” said Councillor Hinton.

“Litter-picks are making things better in the short term but something needs to be done to stop the problem altogether. Its something we need to tackle as a town.

I would like to see cigarette disposal bins fixed to the walls outside shops.”

About 50 volunteers turned out on Saturday for Hit Litter. About 30 met up at Christ Church and another 20 joined a team from the Gainsborough Residents Association in Gainsborough Road.

Click here to see more pictures of those who took part.

They were given different areas to clean up using rubbish bags and litter-pickers provided by Biffa on behalf of South Oxfordshire District Council and spent almost two hours collecting litter. Cllr Hinton said: “The response was fantastic. We had about 50 people turn up, which is phenomenal. We pretty much covered the whole town.

To get to the point where we were running out of equipment was fantastic. It shows that people do want to look after Henley.”

The volunteers included Mayor Stefan Gawrysiak, councillors, the 1st Henley brownies, members of the Royal National Lifeboat Institution, the Henley Air Cadets 447 Squadron and residents. Cllr Gawrysiak, who covered the Greys Road area, said: We had a great number of volunteers, which shows that the community of Henley will come out to do something positive.

Town and district councillor Jeni Wood, who tidied along Reading Road and the adjoining streets, said: “I have been doing this litter-pick for many years. Its the right thing to do if we want to keep our town tidy.”

“I cant stand the litter,” she said. “I dont know who drops it. I often pick it up even when there isnt a litter-pick going on.”

A skip provided by housing association Soha was placed in Gainsborough Road from 8am to 10am to give residents a chance to clear out any unwanted items for nothing. 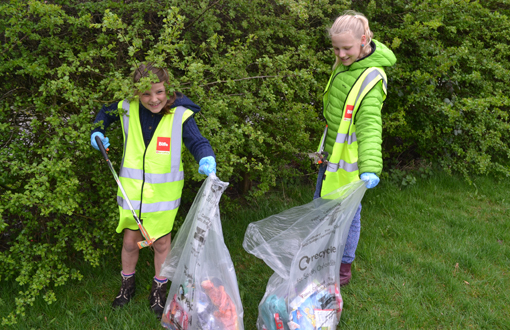 Claire Forno, of Gainsborough Road, was one of the volunteers who tidied the recreation ground along with her daughters, Poppy Priestley, 11, and seven-year-old Nell Priestley.

She said: “This is the first Hit Litter we have done. We wanted to take part because its something that needs doing. The amount of rubbish is not as bad as I thought it would be. The rubbish seems to sweep across the playing field into the bushes and there is a lot of glass.”

Volunteer Andy Bennett, 41, of Nicholas Road, said: “I wanted to do something good for Henley so I thought I would come along.”

Mr Eggleton said: “It was great to see so many families and kids out helping to get their streets clean and many asked if it could be a more regular event.”

Simon Narracott, of Gainsborough Road, added: “This is a great example of what can be done when different groups work together.

Working closely with Soha has allowed us to show that we are a community that cares and can deliver rather than sitting back, moaning and expecting others to do it all.”

After the clean-up, helpers gathered at the Christ Church centre in Reading Road to enjoy soup served by Doug Richards, who volunteers at the centre and is site manager at the Watermans allotments.

The refreshments were introduced this year to help give the volunteers a sense of camaraderie.

Hit Litter is the first major initiative as Henley gears up for the national Britain in Bloom competition, supported by the Henley Standards Going For Gold campaign.

Cllr Hinton said: “It has been a fantastic start to the year for Henley in Bloom.”