Make it a weekend at Fawley Hill Vintage Festival

TICKETS have gone on sale for this years Fawley Hill Vintage Festival.

More than 150 traction engines and steam rollers will be on show at the charity event hosted by Sir William and Lady McAlpine on May 17 and 18.

There will also be a wide range of vintage bikes, cars, military and commercial vehicles, racing camels, a Spitfire and Hurricane, Tiger Nine and other planes.

Other attractions will include Sam Brown and her 100 Ukuleles, fire dancers and belly dancers as well as opera, folk, jazz and rock music.

Lady McAlpine said: “It is becoming The Goodwood Revival with a train instead of a racetrack! Even the Punch and Judy man operates out of a vintage vehicle.”

Members of the Henley Amateur Operatic Dramatic Society will perform Oh! What A Lovely War in two parts on each day to tie in with a display of vintage military machinery and equipment organised by Martyn Sheldrake, secretary of the Berkshire and Oxfordshire Military Vehicle Trust.

Newsnight presenter Jeremy Paxman, whose book on life during the First World War was published recently, will introduce the production at 1pm on the Sunday.

The Gurkhas with be present with their regimental band and curry tent and the Royal British Legion will have a tea tent in which Woodcote amateur historian Mike Willoughby will display his Lest We Forget exhibition.

Lady McAlpine says she expects many celebrities to arrive over the weekend as well as the Sir Henry Aubrey-Fletcher and Sir Stuart Hampson, the Lord Lieutenant and the High Sheriff of Buckinghamshire, respectively.

This years event will begin with Rock on the Hill on the evening of Friday, May 16 when BBC Radio Berkshire DJ Mike Read and award-winning Elvis tribute act Ben Portsmouth will be among the performers. There will also be a raffle and auction.

A buffet supper will be provided by Paul Clerehugh, chef-proprietor of the Crooked Billet in Stoke Row. Tickets for the event are £150, which includes VIP entry to the rest of weekend. Mr Clerehugh will also create a pop-up restaurant at the festival itself.

Charities signed up to fund-raise at the event The Wilderness Trust, the Chiltern Centre, the Ways and Means Trust, Row2Recovery, Child Bereavement UK and the Gurkha Welfare Trust. 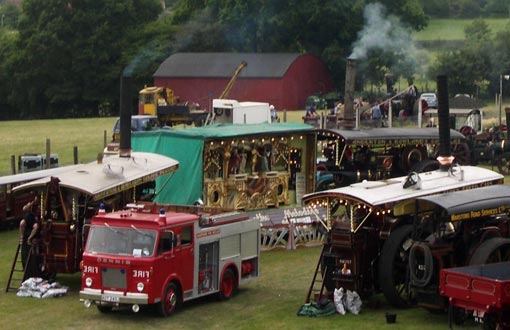