Crowds at regatta but crime kept to minimum

CRIME and disorder in Henley during the royal regatta were kept to a minimum thanks to a high-profile police presence.

Up to 40 officers were on duty during the five days of the event.

Thames Valley Police wouldnt say how many arrests were made in total but 15 were made by the police neighbourhood team operating in the town. Twenty-three crimes were reported in the town centre.

Inspector Mark Harling, head of Henley police, said: I think the event was busier than last year and when you consider that for 200,000-plus people we had the number of crimes we did it is a very good result. Some people behaved very well, some people let themselves down  thats what we have to roll with.

He praised his team, saying: They were the first and the last on duty and for some of them it was their fourth or fifth year of working at regatta and thats a really big ask.

During the Wednesday night police made two arrests. A 21-year-old man was arrested on suspicion of criminal damage at the Old Bell pub Bell Street and give a fixed penalty. A 48-year-old man was charged with assault by The Angel on the Bridge pub.

During the Thursday night there were five incidents, including a 25-year-old man found smoking cannabis in the Mahiki bar on the Berkshire bank. Two men, aged 35 and 19, were arrested in Hart Street on suspicion of being drunk and disorderly and given a fixed penalty. A 22-year-old man from Wargrave was arrested on suspicion of assault in Bell Street and was given a police caution and a 20-year-old was charged after verbally abusing an officer.

On Friday, five incidents took place, including an assault on a man on Henley Bridge. A 25-year-old man from Caversham was arrested for breaching a section 27 order and was given a police caution and a 17-year-old was found smoking cannabis on the Thames towpath and given a warning. Two men, aged 20 and 22, caught fighting in Hart Street were both issued with a fixed penalty for disorder.

A 52-year-old was arrested in Bell Street and charged with drink driving. 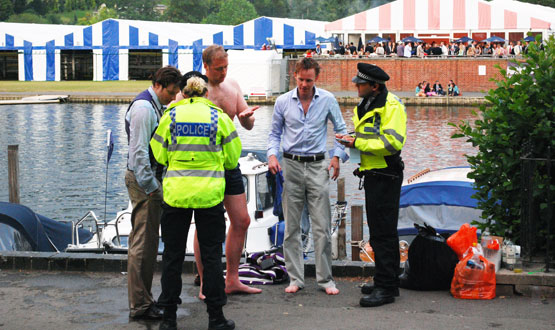