A STAR line-up rocked the 32nd Henley Festival at the weekend.

Burt Bacharach headlined on Friday with a special appearance from Eliza Doolittle.

He performed some of his greatest hits, including The Look Of Love, I Say A Little Prayer, Raindrops Keep Fallin On My Head and (They Long To Be) Close To You. 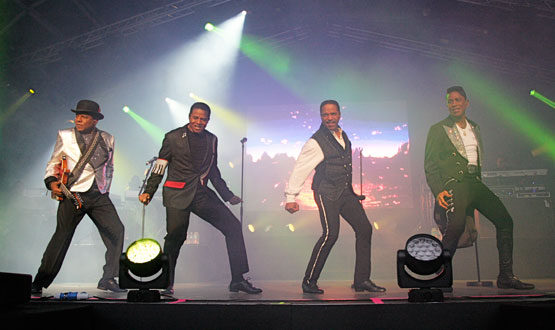 On Saturday, The Jacksons were introduced by actor Don Warrington.

They walked on stage in unison to loud cheers following a two-minute video showing highlights from their career and most recent tour.

Frontman Jackie shouted Can you feel it? twice and received a loud roar back from the audience both times.

The four brothers then launched into a medley of their hits Can You Feel It and Blame It On The Boogie.

About halfway through the show, they stopped and showed a 10-minute documentary about their achievements.

There were cheers when they discussed Michael but some members of the audience soon became impatient and started clapping slowly and shouting at them to carry on playing.

Their set continued with hits I Want You Back and ABC 123 as well as Michael Jackson tracks Wanna Be Startin Somethin and Dont Stop Til You Get Enough.

She dedicated her last song to Claire Peacock, a social worker from Henley who died earlier this year.

Meanwhile, the Overtones set was constantly interrupted by girls shouting I love you, to which they responded with I love you too.

Gill Mitchell, chief executive of the Henley Festival, said: We were brilliantly lucky with the weather. We had five very popular nights, each brilliant in their own way.

When you are on the site with the backdrop of Henley Bridge and St Marys Church, its just stunning. Its the best location in the country. It is an integral part of the event and we are thrilled we are still here.

For more pictures and reviews see the Henley Standard on Friday or take a look at our online videos here.