THE partner of a Henley woman who died from bleeding on the brain earlier this year has thanked singer Rebecca Ferguson for a perfect tribute.

Gary Boys wrote to the former X Factor star asking her to dedicate a song to Claire Peacock, who died in March, during her headline set at the Henley Festival last Sunday.

Ms Peacock, 37, a social worker, of Grange Road, Henley, collapsed suddenly in a shopping centre car park in Aylesbury and later died in hospital. She had suffered a brain haemorrhage in 2006 and required yearly check-ups.

Mr Boys, who had been with Ms Peacock for three years and planned to take her to watch Ferguson at the festival, said he decided to write the letter because of the similarities in the two womens lives. 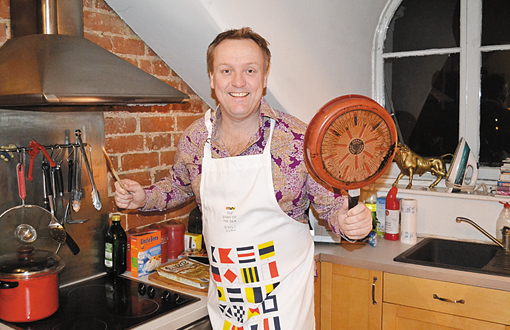 The 46-year-old, who lives in River Terrace, Henley, said: We followed Rebecca on The X Factor and she and Claire had lots of common themes in their lives. They were both very talented, had lost their confidence, had two kids they brought up as a single mum before going on to re-educate themselves and find a new career. Claire totally got Rebeccas songs and what she was singing about and would play her music all the time.

She went to the festival every single year and would always tell me what she wanted to see and ask me to get tickets.

Claires second to last text she ever sent me was to get tickets to Rebecca Ferguson for me and her on the Sunday night.

She was meant to see Brian Ferry on Wednesday with her mum and then me and her would go to Rebecca Ferguson together on Sunday. She was so excited to see her.

Mr Boys letter spoke about Ms Peacocks life and work caring for children in Henley, describing her as a light that has gone too soon.

The marketing consultant, who runs GB Consultancy UK, in Station Road, also enclosed two articles on Ms Peacock from the Henley Standard before asking staff at the ticket office to put the letter in Fergusons dressing room.

He said: I was thinking about what would be a fitting tribute to Claire and I wondered if I just wrote something would that work.It was a total punt really, Im sure Rebecca gets lots of letters and requests but I really thought about the parallels between the two of them and if I wrote about that then maybe if Im lucky she might just do it.

It was a lovely thing to do, she didnt have to but it shows what a lovely woman she is.

Ferguson dedicated the last song of her set, top 10 hit Nothings Real but Love, to Ms Peacock and even read out Mr Boys letter to the audience beforehand.

She told the crowd: I got this letter backstage and it really touched me. I wrote the song about how we lose sight of whats important and the most important thing is family.

Id like to dedicate the song to Claire and her family.

Mr Boys, who was in the crowd with Ms Peacocks mother Karin and children Freya, 17, and Finley, 15, said: I didnt think for one moment that not only would Rebecca give a tribute to Claire but she would also read out what I had written. The emotion she showed when reading it was touching.

I saw her walk on stage with the letter at the start of her set and she was determined to read it. I could tell in her voice she was moved, she was struggling to get it out.

I didnt request a particular song but she decided to pick the last song of the night. It was the perfect song to choose and a fitting tribute after what has been a challenging time for all Claires friends and family.

After the festival, Ferguson tweeted: Gorgeous gig loved henley, loved the letter reminded me that family is the most important thing I love my children. r.i.p clare (sic) xxxxx

She also replied to tweets from Ms Peacocks son Finley and family friend Jamie Bruce, who performed at the festival on Sunday night.

Mr Boys said: I think the heart she showed to do that was very similar to Claire: selfless and always happy to do something for someone else.

Claire would have been gobsmacked if she had been in the audience, it would have floored her that people cared so much about her.

It was a sad moment but a happy moment too. Me, Karin and the children were all together and we hugged each other and celebrated Claires life in a beautiful way.

It was a fitting tribute to a remarkable woman.