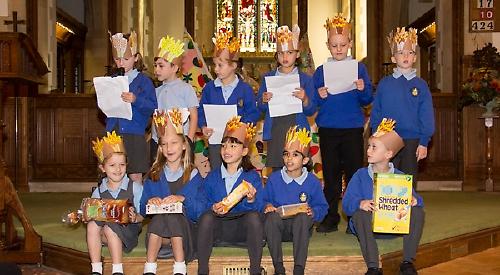 PUPILS at a Wargrave school celebrated the harvest festival by collecting hundreds of items of food to give to elderly villagers.

The goods were then put on show at St Mary’s Church in Station Road, where the pupils gave a presentation about harvest celebrations around the world. Each class talked about a different item, including tea, chocolate and apples.

One group used a large painting of a banana which they divided up to show how much a grower receives from the sale of the fruit. They also recited a poem they had written about fair trade.

Rev John Cook, the vicar of Wargrave, gave a talk about the harvest festival tradition to the children. Parish councillor Marion Pope arranged for the food to be handed out around the village.

Executive headteacher Sally Ann Akers said: “The children thought hard about the messages they wanted to communicate about where our food and other products we take for granted come from.

“They included some difficult questions about how much we waste and why we should support fair trade. The food was delivered to the elderly folk of the village who appreciated the visit as well as the produce.”

Meanwhile, a Christmas bazaar will be held at the junior school on Saturday, November 26 from 1pm to 3.30pm.

Attractions will include stalls selling festive goods such as gift hampers and toys, games such as guess the weight of the Christmas cake, a bottle tombola and raffle. Father Christmas will meet youngsters in his grotto and teachers will help children wrap presents for family and friends in a secret present room.

The annual event is organised by the parents association of the junior school and Robert Piggott Infants School in Beverley Gardens.

Entry is free for children with a suggested donation of £1 per adult. For more information, call association chairwoman Lucinda Bryers on 07748 985523.