Students return to college to perform with their rock band 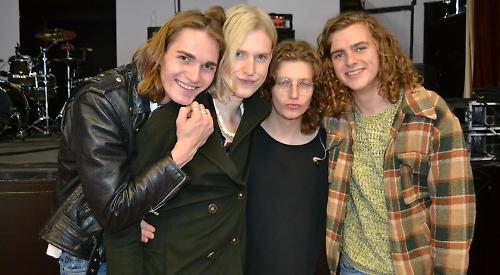 Haydn Evans and Dom Cordell started Sundara Karma in 2010 with Oscar Pollock and Ally Baty, who are former pupils of the Oratory School in Woodcote.

In 2012 the band won a Battle of the School Bands competition organised by the Reading Rock Academy with a prize of a recording session at a professional studio and a digital release on iTunes.

Since then, they have performed across the country and played on the main stage at the Reading Festival for the last two years.

They will be touring America next month to coincide with the release of their debut album Youth Is Only Ever Fun In Retrospect.

The band played two shows in the Rotherfield Hall at the college on Thursday last week and students queued outside for almost an hour to get in.

Haydn said: “I knew Oscar from primary school but we lost touch after that. We got in contact on Facebook and he said he needed a drummer for his new band.

“It’s quite weird being back at the college but it feels good. I have a lot of memories of this place.”