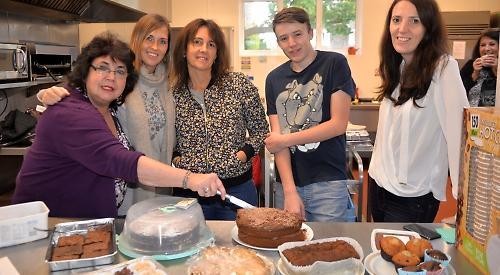 Hundreds of people attended Sunday’s event, which included a bouncy castle, penalty shoot-outs, arts and crafts, a lucky dip, cream teas, face-painting and about a dozen stalls selling a range of handmade goods. There was also a raffle with a prize of two tickets to a Premier League match.

Visitors could have a ride on Scooby, a Welsh Section D pony.

The event was organised by Dawn Johnson, of Gravel Road, Binfield Heath, after her friend Lorrie Williams, who used to run the village shop, was diagnosed with myeloma. The disease affects plasma cells in the bone marrow and is a chronic condition. It most commonly causes pain, fatigue, anaemia and nerve and kidney damage and cannot be cured though it can be treated with chemotherapy.

Also present was Mrs Ilsley’s son Charlie, nine, who spent most of last year battling a malignant brain tumour but received the all-clear after several bouts of chemotherapy. Karen Williams said: “Dawn has been so kind and helpful to mum and accompanied her to so many chemotherapy appointments. She has been an angel and we really want to thank her for everything she has done.

“She put an awful lot of effort into this and we knew nothing about it until the last minute, so it was quite a surprise.

“Everyone who came seemed to be really enjoying themselves so I think it was a big success.

“Mum and dad were very touched by the number of people who showed up.”

Mrs Johnson said: “It went pretty well. I’d have liked more people to attend but everyone who came had fun and we raised money for a good cause, which is what it was all about.”