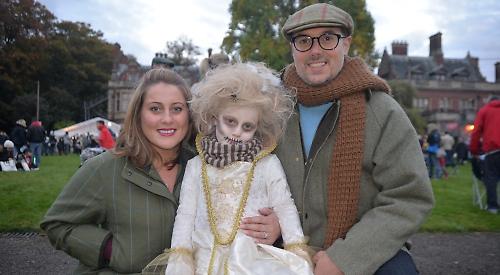 Darcie Williamson-Pound, four, from Nuffield, wore a fairytale princess costume with spooky face paint and a dishevelled wig covered in fake spider webs to take first prize in the five-year-olds and under category.

She won the same category last year, when her parents Alastair and Emily dressed her as a “blood-sucking” vampire lawyer.

The older children’s category was won by Lucas Hendley, nine, of Kidmore End Road, Caversham, who dressed as a mummy by wrapping himself in bandages and painting his face white.

Mr Williamson-Pound said: “We bought the costume completely randomly while on a camping holiday in Dorset because Darcie goes to so many birthday parties and it was something she could wear to look like a princess.

“We thought it worked quite well with the wig and the spider webs. Darcie’s really pleased to have won.” Lucas’s father Andrew said: “He just decided that he wanted to be a mummy. His three brothers also wanted to be mummies but I persuaded them to all try different costumes.”

The winners in both age groups won tickets to the Regal Picturehouse cinema in Henley.

Henley Mayor Julian Brookes, who judged the competition with his wife Garbriele, said: “The children’s costumes were absolutely amazing.

“There were so many that I was overwhelmed and it was really difficult to choose the winners. Theyhad all put in an incredible effort, so congratulations to everybody who took part.”

Thousands of people attended the 24th annual display and bonfire at the charity’s hospice in Nettlebed on Saturday night.

It was organised by Sue Ryder with support and advice from members of the Henley, Henley Bridge and Reading Abbey Rotary clubs. Attractions included a children’s carousel, a barbecue, a Brakspear beer tent a cake stall and a raffle.

Entertainment was provided by the Fiesta Steel Band, from Tilehurst, who played rearranged versions of pop songs including Don’t Stop Me Now by Queen, Take On Me by A-Ha, and The Final Countdown by Europe.

The evening, which was sponsored by Henley investment firm Invesco Perpetual, raised £16,000.

Head of fund-raising Tracey Hancock said: “It was a fantastic turnout and I’d like to say a huge thanks to all who attended. We truly appreciate the support of our local community, supporters, sponsors and partners. We could not do what we do here at Nettlebed Hospice without your help.”