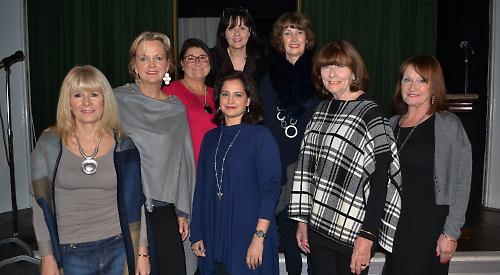 A FASHION show at Goring village hall raised about £1,500 for the RAF Benevolent Fund.

About 140 people attended the event, which was called “Let’s celebrate being a woman” and featured 25 models from teenagers to pensioners in styles from the Forties to the present day.

It was organised by Gina Bennett, who runs the Ruby Pepper boutique in Goring, and each model wore several outfits from her shop.

Staff from the Virgo Beauty salon shared skincare tips and techniques while the team from Albert Fields hairdressers gave a styling demonstration and performed a makeover. Other independent businesses from the village that took part included gift shop Inspiration, the Village Café, Swiftclik office supplies, the Catherine Wheel, the Swan at Streatley and Pierreponts café, which served drinks and canapés.

A team of about 20 volunteers provided staging and ran the sound and lighting equipment.

Mrs Bennett, from South Stoke, said: “We had a full house and the atmosphere was buzzing.

“We stayed at the hall for hours after it had finished just to chat with each other. God only knows what time we all got to bed!

“My phone hasn’t stopped ringing with texts of congratulation and I’ve already been asked to run two more charity shows elsewhere, so I don’t think it could have gone any better.”

Mrs Bennett thanked members of the hall committee for their advice and support.