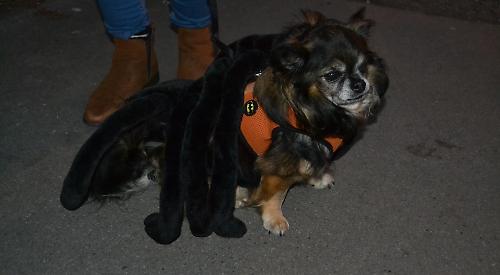 A CHIHUAHUA called Dino won a Halloween dog parade in Henley after being dressed up as a giant spider.

The seven-year-old pooch was named the best-dressed dog at the parade organised by Aspen Weatherburn, owner of groomers Naughty Mutt Nice, on Monday evening.

Dino was one of about a dozen dogs to take part in the parade outside the shop in Reading Road.

His owner Angela Kerr, from Hambleden, said: “I’m really happy and proud. I wanted to dress him in something that was a proper Halloween outfit and not too cutesy and I came up with the idea of a creepy-crawly. He’s four-legged and I wanted to make him eight-legged.”

Kitty, who lives Henley, said: “I’m really happy. I thought it would be a good costume but I didn’t think we’d get third place.

“When I found out about the parade I asked ‘please can we go?’ I came up with two costume ideas — the other one was a ballerina.”

All the dogs and their owners were given a goodie bag with dog snacks and Dino will also receive a complimentary groom at Naughty Mutt Nice as his prize.

Ms Weatherburn said: “Halloween is becoming bigger and bigger in this country and I wanted to give this a go.

“The attendance was absolutely amazing. I never expected that many people and the effort they all put in was really cool. It’s testament to how much the people of Henley love their dogs.

“This is the first year we’ve done this but on the basis of what’s happened tonight it won’t be the last.”