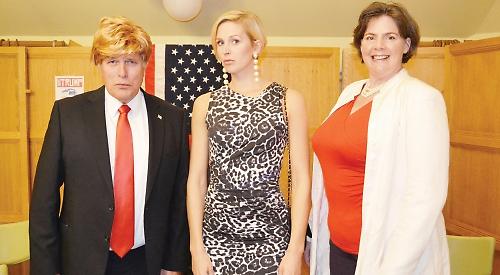 DONALD TRUMP and Hillary Clinton impersonators went head-to-head in a debate at Henley’s Leander Club on the evening of the US presidential election.

The candidates, who were played by club president Jeremy Randall and committee member Anne Buckingham, spent an hour taking digs at one another in front of an audience of about 70 members.

An informal vote was taken at the end and, unlike in the real election, in which the Republican businessman took the White House, the crowd backed his Democratic rival.

The event took place in the club’s dining room, which was decorated with red, white and blue balloons, Stars and Stripes bunting and election posters for Trump and Clinton.

The party entered the room to the sound of Hail to the Chief, the official presidential anthem, and “Mr Trump” walked enthusiastically from table to table, shaking hands and greeting guests.

In her opening statement Mrs Buckingham, who is American and a member of the Democratic Party’s Democrats Abroad group, said: “It’s quite a thing for me to be here as I understand Leander Club didn’t admit women for quite a time. Perhaps it’s time you elected a woman as president.

“I represent the underdog and, with six bankruptcies behind him, that’s something Donald knows all about. If you want someone who knows what they’re doing, vote for me.”

Dr Bennett-Powell asked “Trump”: “What would you say to critics who think you’re a madman who’s one heartbeat away from the nuclear button?”

He replied to laughter from the crowd: “Just give me that button — I’ll show them.”

Asked his thoughts on Brexit, he said: “Let me tell you, the UK is our greatest friend and I really admire you for pulling out of that whole Europe thing.

“I’m a fan of devolution too — Scotland is the best golf course in England and many of my friends are Scotlanders.”

Referring to her opponent’s plans for a wall along the American border with Mexico, Mrs Buckingham replied: “The reason he likes Scotland so much is that they built a wall across their border.

“I’ve been there many times and can tell you it doesn’t work.”

Mr Randall hit back: “Of course it does. Have you ever seen any Mexicans in England?”

The evening, which concluded with a dinner, was the first in a series of weekly social events to bring members together and attract new ones.

The next event will be an informal talk called “My Sporting Triumphs and Disasters”.

Organiser Andy Trotman said: “It was an excellent way to kick it off. The players really got stuck into their roles and engaged the audience while the moderator did a cracking job. It was hugely popular and sold out.”

Dr Bennett-Powell said: “It was a scintillating night. We were blessed with the two main characters, one of whom really knew her stuff, while ‘Trump’ played it for laughs.

“I’m afraid we failed to predict the outcome of the actual election. There was a show of hands and, apart from a few brave Trump supporters, it was almost unanimous for Hillary.”