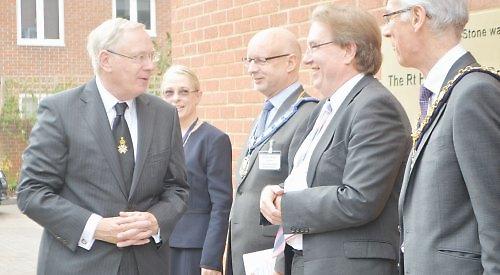 A NEW care home in Henley has been officially opened by a member of the royal family.

The Duke of Gloucester, who is first cousin to the Queen, unveiled a plaque at the Orders of St John Care Trust home, off York Road, on Tuesday.

The 64-bed home, which is officially called the Chilterns Court Care Centre, will replace Chilterns End, the trust’s existing home off Greys Road.

Residents will be moved to the new home on the redeveloped Townlands Hospital campus in the next few weeks while the site of the old home is likely to be sold for redevelopment.

Other guests at the opening included Mayor Julian Brookes and representatives of organisations including the Townlands Steering Group, Henley Lions Club and the 60-Plus Club.

The Duke was then taken inside for a tour of the building, including individual rooms and the communal areas, and watched a baking demonstration.

He also met some of the elderly people who will be living there and talked to care providers from the trust and social housing association bpha.

As he unveiled a plaque on the ground floor, the Duke joked that he had a collection of similar ones from previous engagements which had been discarded due to misspellings.

He was presented with a commemorative bottle of champagne by 103-year-old Peggy Dixon, who has been at Chilterns End for the past five years.

She said later that the Duke complimented her on appearance, saying she looked “wonderful” for her age.

Mrs Dixon added: “I’m very happy and I think the new home is marvellous. It’s a really beautiful place and whoever thought it up has done a very good job.”

The Duke signed the visitors’ book in the foyer before he left and visitors were then able to tour the building. Dan Hayes, chief executive of the trust, said: “The overall hospital development has been in the planning for many years so it’s great to finally get to the day where we are opening the care home. It’s a brilliant, state-of-the-art home.

“In any developments there are doubts along the way but we didn’t feel that about Henley because there has been such massive support.

“The local population and interested parties all had a collective wish for new services to be delivered on this site.

“I think it’s particularly special because of the location — this is as close to perfect as you can get at the heart of the Henley community.”

Home manager Vicki Morl said it was an exciting occasion, adding: “Our residents and employees were thrilled to welcome his royal highness and were very keen to show him around our new home.” Councillor Brookes said: “It’s wonderful that the new home is now open. It’s a nice, modern, bright building.

“I’ve been hearing all about it and some of the innovative things they have in the rooms. I’m going to book a room soon!”

The care home is built over three storeys and will offer residential and dementia care for patients.

It is designed to have small “households”, each with its own living area, including a lounge, sitting room, kitchen and dining room.

All residents will have their own bedroom with en-suite bathroom facilities, Sky and digital TV, wi-fi and 24-hour nurse call facility.

There is a central communal area with a café bistro, hair salon, shop and activities room and there will be a dedicated activities co-ordinator.

Outside there is a safe and secure garden for residents and there are plans for a sensory garden with raised planters, vegetable patches and a water feature.

The home also has eight beds to be used in conjunction with the rapid access care unit at the neighbouring hospital, which is expected to open in January, with three more on demand.

Roger Dickinson, who chairs the Townlands Stakeholder Reference Group, said: “We have purchased a total of 11 beds in the new care home and we will use these beds flexibly.

“We hope that this arrangement will provide excellent care for people in Henley who may require a short spell of medical intervention to get better.”

Mr Howell said: “I was delighted to see the care home opening and it brings to an end the discussion about beds for the hospital.

“The beds are provided in the home, which is adjacent to the hospital, and it’s good news for the people of Henley.”

Health chiefs were strongly criticised for not reproviding beds at the new hospital as was originally planned, sparking the Henley Standard’s Save Our Beds campaign.