Schools in mood for Christmas... 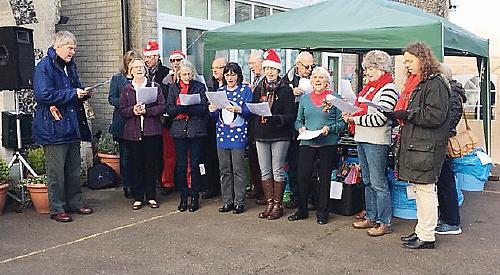 CHILDREN got into the Christmas spirit as their schools held festive fund-raising fairs.

Dozens of parents and pupils attended the fair at the Piggott School in Wargrave on Friday, which continued until 9pm.

There were stalls selling crafts, books, cakes and toys as well as a raffle and a tombola. The adults were served mulled wine.

Cakes from a baking competition held at the school earlier in the day were also on sale.

A Christmas bazaar was held at Robert Piggott Junior School, in School Hill, Wargrave, on Saturday.

Hundreds of families attended the event, which was organised by the school’s parents’ association. The school entrance was adorned with a large Christmas tree decorated with tinsel and baubles.

Inside, the attractions included Santa’s grotto, carol singing, craft and gift stalls and a “secret” present room where children could wrap up presents to give to their parents.

There was also a raffle, tombola and a competition to guess the weight of a Christmas cake.

Year six pupils sold Christmas gifts which they had made as part of an enterprise project during lessons to raise money for
charity.

Executive headteacher Sally Ann Akers said: “The bazaar marks the beginning of the Christmas season at school and is anticipated with excitement. It is always well attended and supported by our families and the wider community.

“I would like to thank the parents’ association for a wonderful afternoon of festive fun which will have raised some much-needed funds for our iPad and outdoor learning projects.”

On Wednesday last week pupils from the school visited nearby Riverways Farm, where they learned how to feed reindeer.

The farm is run by Wargrave parish councillor Andrew Cardy and his family and has 13 resident reindeer.

On Sunday, Charvil Piggott Primary School held its first ever Christmas fete, attended by about 300 people.

The school in Park Lane had stalls with food, drink and crafts from more than 20 local businesses.

The school choir, which is made up of year one and two pupils, sang for visitors.

Father Christmas himself visited towards the end of the event.

The fete was organised by the parents’ association and raised more than £1,200 for the school.

Rebecca Williams, who chairs the association, said: “It was very successful and we are happy with the outcome, especially as it was our first fete. We definitely want to do it again next year.

“Our thanks go to the businesses and residents of Charvil who supported us, the volunteers and the teachers.”

Crazies Hill Primary School will hold its Christmas fair with all the usual attractions tomorrow (Saturday) from noon to 2.30pm.