...and Santa arrives in horse-drawn carriage 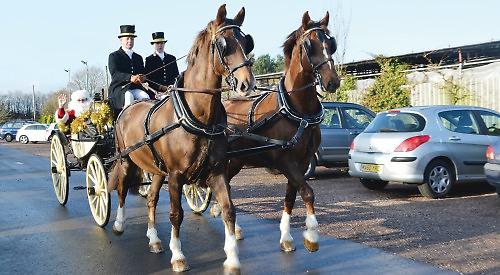 FATHER Christmas arrived at a garden centre near Wargrave on a horse-drawn carriage to open his grotto.

Dozens of children gathered to watch his entrance at Hare Hatch Sheeplands on Saturday, pulled by two horses, Toffo and Yogi, with Haydn Webb at the reins.

Santa waved to visitors before settling into his grotto ready for the festive season.

He also met Lily Wellstead, Hayley Absolom and six-year-old Ellie Mattingley, from Woodley, who won a competition run by the centre to be a “princess for a day”.

Children queued up to sit on Father Christmas’s knee and tell him what they wanted for Christmas. All received a present.

The grotto will be open from 10.30am to 4pm on Saturdays and Sundays in the run-up to Christmas.

From tomorrow (Saturday) visitors will also be able to have breakfast with Father Christmas at 9am before the grotto opens.

His visits have been organised by the Rotary Club of Maiden Erlegh and all proceeds will go to the club’s charities.

l A food festival will be held at the garden centre this weekend. There will be cooking demonstrations by chef Brendon Ballantyne and the centre’s resident fishmonger Paul Wheston.