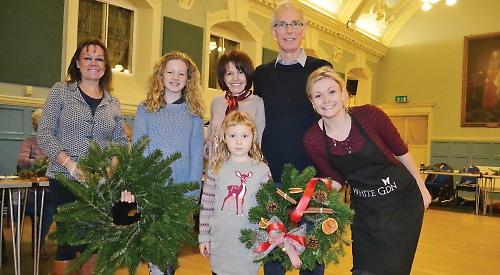 Dozens of people attended a wreath-making workshop at Henley town hall on Saturday.

The event was led by Annette March, of White Gdn florists in Hart Street and among those to take part were Henley Mayor Julian Brookes and his wife Gabriele and town manager Helen Barnett. Miss March showed them how to weave together bits of blue spruce and decorate them with ribbons, bows and dried fruit and pinecones. They used sticks of cinnamon for scent.

Biscuits and stollen cake were served, along with mulled wine and hot spiced apple juice. The event raised more than £600 which will go to the Mayor’s chosen charities, the Henley YMCA, Riverside Counselling and youth and community project Nomad.

Councillor Brookes said: “People were telling me how much they enjoyed it and I hope to see lots of wreaths hanging on doors around the town.” Miss March said: “We’ve got a lot of talented, artistic people in Henley and no-one really struggled with it.” Pictire are, Joanne Cope, Rosie Perkins, 12, Lorelei Southwell, six, Gabriele and Julian Brookes and Annette March