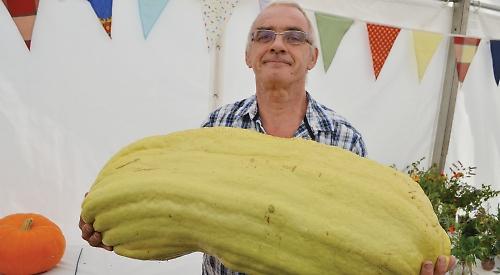 A MAN who painstakingly restored a vintage tractor after suffering a stroke claimed the best in show prize at Ewelme Horticultural Society’s 37th annual show.

Judges praised the love and dedication that Brian Connelly had put into reviving the 1964 International Harvester 414.

The tractor was one of about 420 entries at the show, which was held on the village recreation ground on bank holiday Monday.

The engine had seized up but the bodywork was in good condition and he hoped to restore the vehicle to its former glory and enter ploughing matches.

With help from friends, he managed to get the engine running and new gaskets for the rear axle were ordered.

But in 2009 he suffered a life-changing stroke and spent six months in hospital.

He was left with little or no use of his right side and a brain condition called aphasia, which means he can understand everything that is said to him but is unable to respond.

Friends fitted the gaskets for him and Mr Connelly had set about taking the tractor apart when he met fellow enthusiast Bernard Winnington at Stoke Row Steam Rally, where he was exhibiting another 414.

The pair became friends and worked on Mr Connelly’s tractor along with his son Daniel.

Mr Connelly’s wife Margaret said: “When he bought the tractor it was on a farm near Reading and in a really poor state. The engine  wouldn’t do anything.

“His friends from the tractor group brought it over and put it in our garage at home.

“Since then, when Brian has felt well enough, he has gone up there and taken bits off and and rubbed it down.

“It’s blood, sweat and tears that have gone into it over the years.”

She said her husband was proud to win best in show, adding: “His smile says it all.”

She said: “I’m very pleased. A few years ago there was a piece in the village newsletter that said if we didn’t use the show we risked losing it so ever since then I’ve entered lots of stuff.

“I’m on the horticultural committee and I just love the show — I love Ewelme.”

Gary Heeks won five of the six categories he entered, including heaviest pumpkin at 264lb, heaviest marrow at 79lb and top tray for his peppers, tomatoes and carrots.

Mr Heeks, 55, of Lawson Road, Henley, said this was his biggest number of show firsts.

“I’m elated — I’m getting it right at last,” he said. “I’m most pleased with the top tray to be honest because I’ve been going for that for the last three years.

“I wasted 20 carrots on show morning just to get three of ideal size, so I’ll be living on carrots for the next few nights!”

Mr Heeks said his pumpkin was fed on chicken manure and calcified seaweed and his marrow on the seaweed and volcanic rock dust.

He added: “The pumpkin is actually soft but I won’t be eating it because I don’t like pumpkin! I’ll split it in half, take some seed out for next year and the rest will go in the compost.”

She said: “I’m delighted. I’m most proud of the courgettes because it’s so hard to pick them under six inches, which is really tiny when they grow so quickly.”

Mrs Jaggard grows her vegetables at home for the table but has been entering the show for about 25 years.

“It’s a bit of fun on the side,” she said. “You can see different people’s husbandry and characteristics — they don’t mind putting in nobbly carrots and I think that’s lovely.”

She said: “I entered all the way through my childhood. We have always done it as a family.  I’m slowly building up my entries so I may do more next year.”

About 400 visitors attended the show, where other attractions included craft, bric-a-brac and charity stalls, a display of classic cars, music from the Chalgrove Band, a raffle and a skittles competition. Visitors could also handle rabbits, guinea pigs, a lizard, a tarantula and snakes.

Society chairwoman Tracey Stringer said: “It was an excellent day. We had more exhibits this year than last and more visitors — and the sun was shining.

“Ewelme is a traditional village and the show just seems to reflect that and people like to keep it going.”