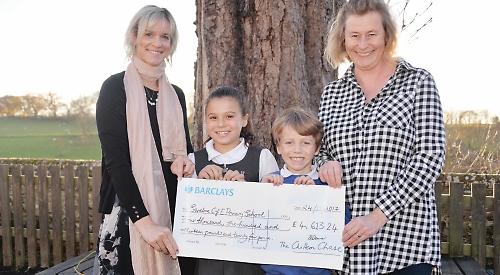 EWELME Primary School has receive a donation of more than £4,600 towards a new playground surface.

This was half the money raised by the 12th annual Chiltern Chase which took place in the village in June. It came from entry fees and sponsorship.

The rest of the money will go to the East Oxfordshire Community First Responders, who cover Benson and Ewelme and other nearby villages.

Laura Gilroy, a member of the organising committee for the event, presented a cheque for £4,613.24 to Debbie Farrell, chairwoman of the Friends of Ewelme School, and pupils Kiera Hood, seven, and William Harding, eight.

The youngsters were chosen as the girls’ and boys’ winners of the “Children’s Chase”, a mile-long event for children.

Mrs Farrell said: “Most of the money will go to the new playground surface and the rest will go into helping to run the school.”

Resurfacing the playground at the High Street school will cost about £15,000.

More than 600 people took part in this year’s event, which featured a 10km and 5km race.

Mrs Gilroy said: “It gets bigger every year. This year was the best year we have ever had but we want it to keep growing.”