Pupils reach for the stars in schools science competition 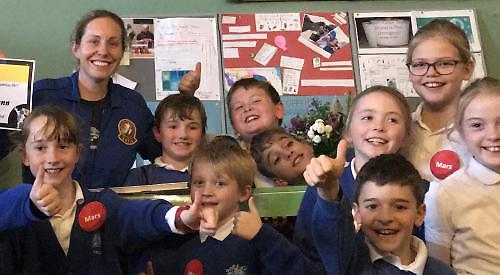 PUPILS at Ewelme Primary School are celebrating success in a science competition.

Twenty-three year five and six pupils
entered the Oratory School contest to design posters based on experiments they had conducted in the classroom.

Some of them then spent the day at the independent school in Woodcote to receive awards and enjoy a day of space-themed activities, including making a robot that could collect space rubble and astronaut training.

They also met Dr Suzanne Imber who won the BBC series Astronauts: Do You Have What It Takes? last year.

Ewelme pupil Ollie Tyler, 10, was named the overall winner in the year six category and there were commendations for Eden Brannan, 10, and nine-year-olds Ollie Katz, Raffy McCann and Isabella Gorman-Harjette. The school was awarded £500 for science-related resources.

Class teacher Hannah Swift said: “I was so proud. Ollie’s experiment was to see what co-ordination and balance was all about. It was such a different and exciting experience and really inspiring for the pupils.”

Headteacher Margery Slatter said: “Many thanks to Miss Swift, who organised the science club, and the parents who supported on the day, in particular with transport. What an outstanding achievement!”