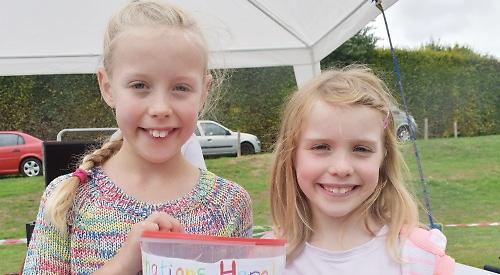 A MAN from Benson was the big winner at Ewelme village show.

Les Bond took the top tray award for his onions, tomatoes and sweetcorn and four other trophies after being awarded a series of first places in the produce and preserves classes.

He said: “The show is really good fun and it’s a social event for people, not just about winning but taking part in the show.”

More than 500 people visited the 38th annual show, which was at the village recreation ground on bank holiday Monday.

There were classes for fruit, vegetables, cakes, preserves, flowers, arts and crafts as well as several for children.

The show, which is organised by Ewelme Horticultural Society, was opened by Great British Bake Off 2013 contestant Christine Wallace, who later ran a question and answer session and signed copies of her book, Christine Bakes for visitors. She also judged a Victoria sponge competition, which was won by Sabrina Longley.

“The village supports it, not just by entering but on the day when there’s a nice atmosphere.

“It’s a traditional show that nobody wants to let go.

“Two people on the committee were founding members, Cynthia Winfield, our treasurer, and my father Michael Glasson, a show secretary, and they strive to keep it going. We’re a little village so something like this is important.”

The show included a range of stalls and an interactive Punch and Judy show for children.

The Friends of Ewelme School ran a barbecue while teas raised more than £1,000.

Wallace, who lives in Didcot, said: “It’s an honour to open this lovely event. I found out Mary Berry did the same a few years ago and I spent eight nerve- wracking weeks with her and she was always truly lovely.

“I had the pleasant task of judging the Victoria sponge cakes and a lot of these could have gone on the table in the Bake Off tent.”