Artists raise £325 for air ambulance based next door 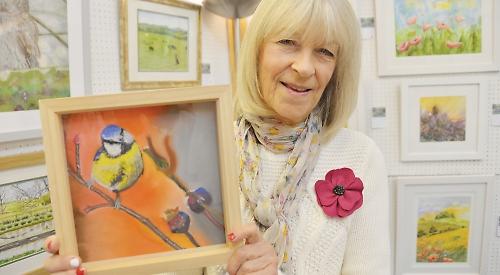 AN art exhibition held at the Watercress Centre in Ewelme raised more than £325 for the Thames Valley Air Ambulance.

Art for All, which was staged by the village’s Watercress Painters group at the weekend, featured 70 works in pastel, oil, pencil, pen and wash, acrylic and watercolour.

These included landscapes, portraits, wildlife and still life and many of them were for sale.

The title of the exhibition, was thought up by Pete Sarreti, whose wife Jeny is a member of the group, before he died in January.

It was opened on Friday evening by Lord Jay of Ewelme, while Ruth Dunkin, from the charity, spoke about the importance of the air ambulance.

About 300 people visited the exhibition and they voted Mrs Sarreti’s watercolour called Teasels and Berries the most popular painting.

Twenty-eight out of 57 paintings that were on sale were bought.

Trisha Scott, who runs the group, said: “It went exceedingly well. We had a lot of support from the village and our friends and from surrounding villages.

“We raised the money through donations, through commission from all the sold paintings and from the card sales. I think for a little village and a little exhibition the total was very good. We wanted to make it affordable art so £100 was the maximum price.”

Mr Sarreti collapsed at home and the air ambulance was called from RAF Benson but because of fog was unable to fly.

Instead a team of paramedics was sent to help him but Mr Sarreti later died at the Royal Berkshire Hospital in Reading.

Mrs Scott said: “We live next door to the air ambulance, which always seems to be taking off so you wonder what’s happened.

“Any of us could be dependent on it at some time and I think that was in people’s minds as they gave so generously.

“On Friday night it was mainly local people from the village and then on Saturday we had lots of people.

“It was a lovely day in an historic village where people can sit outside and have homemade cakes by the brook.”

The group, which has been running for five years, staged its first exhibition in 2016 in aid of Sue Ryder.

Mrs Scott added: “It has put the Watercress Painters on the map and I hope it will continue.”