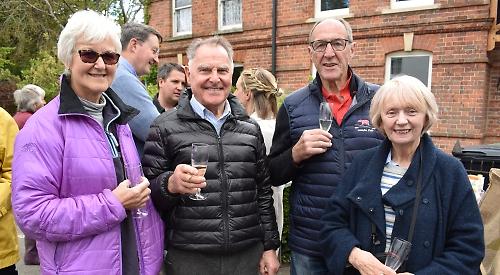 A STREET party was held in Ewelme to mark the 10th anniversary of the village’s community-run shop.

About 50 people attended the celebration in Parsons Lane on Saturday and enjoyed glasses of fizz and party food.

The shop, which opened on May 2, 2009, is owned, staffed and stocked by villagers.

It sells meat, fruit and vegetables as well as fish, milk, bread, wine and beer, newspapers and other essentials, including stamps.

There is also a small café selling tea, coffee and home-made cakes.

Sarah Maine, chairwoman of the shop’s management committee, said: “When we wrote our business plan we said we wanted it to be a focal point for the community and it really has been that. It has been good.

“To start with our volunteers were mainly women but now we probably have more men. They all really like it.

“Someone said they couldn’t come to the party but asked, ‘What would we do without you?’

“It’s the hub of the community and everybody comes through. We get all the gossip and it works for everybody.

“It’s nice to have so many people celebrating with us. People who are new to the village are astounded that everyone knows everyone but they can come and meet a lot of people very quickly.”

Vice-chairwoman Cara Chapman said: “The shop offers something different to lots of people and for a lot of people being volunteers in the shop has been very beneficial.”

She said everyone at the party felt proud, adding: “There were a lot of local people who came, which was very nice to see, and former members of staff who travelled from far and wide, which was very touching.

“Our original objective was to become a focal point for the community and to get to 10 years and to realise we have achieved that is a real milestone. I like to think we mean something to everyone in the community.”

In November 2007 a village survey established that most residents were keen to support the re-opening of a village shop, pledging both financial and/or volunteering help.

With the help of Lord and Lady Jay, who live in the village, the old post office was renovated and leased back to the village for use as a community shop for a nominal rent per annum.

In order for the store to open, more than 350 villagers bought a £10 share, made a donation or held a fund-raising event, raising more than £21,000.

The store has won many awards over the years, including best community store in the South-East in 2017.

Shareholders have a say in what it stocks and the direction it should take. Any profits are ploughed back into the shop or the community.