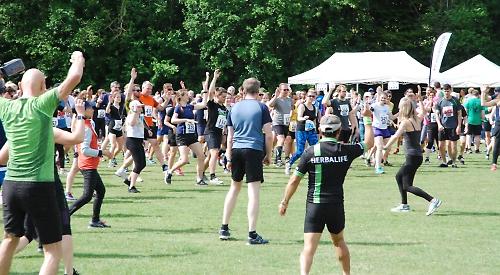 The total was reached at the 14th annual event in Ewelme, which is in aid of the village primary school and this year the Stroke Association.

More than 540 people took part in the multi-terrain challenge, which featured race distances of 5km, 10km and 15km.

More than £7,500 was raised thanks to the event’s second highest entry. Co-organiser Barry Tindall, from Henley, said: “This year the aim was to hit £100,000 and we have done it. We’re really happy and proud of what we have achieved over the years.”

Mr Tindall, who co-founded the event, paid tribute to Chris Winfield and Mike Jeffery who have also been involved with the Chiltern Chase since it began.

“We put a lot of organisation into this,” he said. “There’s a team of 10 of us who all work really well together“.”

Laura Gilroy, who was one of the organisers, watched her three children complete the 5km course.

Her sons Finlay and Guy came second and fourth respectively while daughter Florence achieved a personal best of 33 minutes. Clare Harding ran an aerobic workout before the race and 40 volunteers acted as marshals.

The day also included a demonstration on a defibrillator by Andy Spink, a community first responder for South Central Ambulance Service, and free post-race massages by Terry Davis. Marcus Harris was the compere.

The Friends of Ewelme School served refreshments, including cakes.

Mr Tindall said it was important to support the school, explaining: “They probably get less money than they did before because of education cuts so the top-up is very helpful.”

The full results will be published in next week’s Henley Standard.