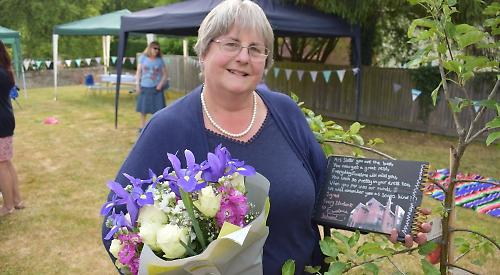 THE headteacher of Ewelme Primary School has retired after more than 25 years’ service.

Margery Slatter joined the school in 1993 as a teaching assistant and underwent her teaching training.

She then became a class teacher for 10 years, then acting head, before taking the top job, a role she held for nine years.

Mrs Slatter was presented with flowers, vouchers, an apple tree and a book of farewell messages from her pupils at a party on Thursday last week.

Parents had made cakes for the occasion and the children sang You Raise Me Up to her.

Guests included former pupils, current and former parents, former governors and members of the parish council. Mrs Slatter said: “It’s a very, very hard place to leave. It’s the children and the parents and the community that serves it and it is the most beautiful place in south Oxfordshire.

“I’m proud of the children and the young people, as they are now, who have been through the school who are out in the world and doing great things.

“Since I’ve been head we have had two successful Ofsted reports and two ‘outstanding’ Statutory Inspection of Anglican and Methodist Schools inspections.”

Mrs Slatter paid tribute to her “wonderful” staff adding: “They have always been hugely supportive.”

In her retirement she hopes to undertake volunteer conservation work and may continue to work part-time.

Chairman of governors Sam Masters said: “She puts the children front and centre of everything. Whenever I go into the school and see her interacting with the children I know how much they like her and how much they enjoy spending time with her. There’s a real bond.”

He also said a second apple tree presented to Mrs Slatter would be planted in the school’s garden.

The school’s new headteacher, Joe Ottaway, will start in September.