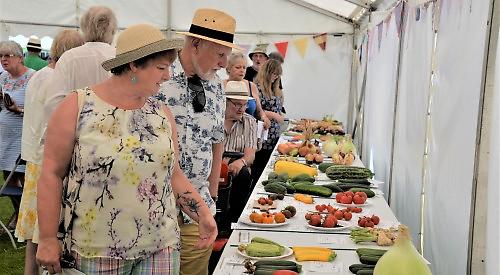 MORE than 500 people soaked up the sunshine at the 39th annual Ewelme village show.

The event, which is organised by Ewelme Horticultural Society, was held on the village recreation ground on bank holiday Monday.

It was opened by Lady Jay of Ewelme, the High Sheriff of Oxfordshire, who said: “I was very honoured when the committee asked me to open this show.

“It is a marvellous event that brings together so many people from Ewelme and further afield so it’s very well treasured.”

She added thatshe would open the show without further delay as it was so hot, epecially for her in her heavy ceremonial robes.

The show featured classes for fruit, vegetables, cakes, preserves, flowers, arts and crafts as well as several for children.

Attractions included children’s entertainer Bertie Slippers and Lu’s Owls with birds that people could handle. The Friends of Ewelme School ran a barbecue and raised £300.

Tracey Stringer, who chairs the society, said: “It went brilliantly.

“There were more exhibits on the tables and more entries in our ‘challenge’ category, where children decorated wellies and adults decorated watering cans. The weather did make for a lovely atmosphere. We had ice creams, Pimm’s and a barbecue so everybody was well fed and nourished.

“The show brings the village together every year. It started off quite small at the back of a pub garden and now we have got a huge marquee.”

On Saturday, Lady Jay held a party on the recreation ground to thank villagers for supporting her since her appointment in April.