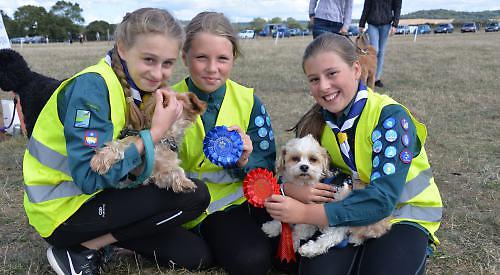 The show was held at Fords Farm in memory of Diana Younger, one of its driving forces, who died in a riding accident earlier this year.

The show also remembered Jane Brazil, former chairwoman of
Riding for the Disabled’s Henley group, which the show supports, who also died this year.

She used to judge the best decorated mane, tail and toes novelty showing class, which was once again a highlight of this year’s show.

It was won by Alexia Hordern, 11, from Nettlebed, riding the gold and silver decorated Wynswood Panache (stable name Ash).

The horse was decorated by Alexia and her friends from Checkendon Equestrian Centre.

The class was judged by Lady Sylvia Jay, the High Sheriff of Oxfordshire.

Catherine Hordern, a member of the show’s committee, said: “It was a brilliant day and everybody really seemed to enjoy it. Diana was such a fabulous character and so committed to it and we were all devastated at her loss. She would definitely have been thrilled to have it in her name.

In the dog show, categories included fastest sit, waggiest tail and best six legs, which was won by 13-year-old Louisa Alvey, from Peppard Common, and her dog Oakley, a five-month-old flat coat retriever.

Mrs Hordern added: “The Ewelme show is very much for people who are starting out and it’s an environment everybody should feel comfortable in. Everybody put in a huge amount of effort and we saw some wonderful examples. The judges were very pleased with what they saw and there was great team spirit among the competitors.

“It’s very important that this show carries on every year because of a dwindling number of small local village horse shows. It used to be that every village had one. This is one of the last remaining truly local horse shows that gets children on ponies in a very nurturing environment.

“It is the highlight of the year for many, particularly children, and for us amateurs with horses and ponies. We just want to go out there and do the best we can, show off our animals — dogs and horses — and have a fun day out.”