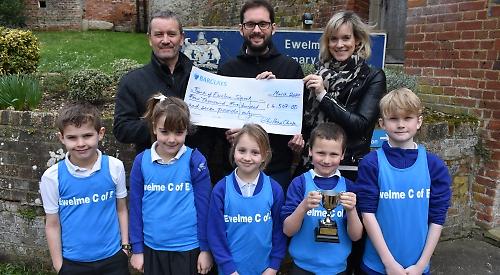 EWELME Primary School has received a donation of more than £4,500 raised by last year’s Chiltern Chase.

Some of the money could go towards a proposed new library at the school.

Barry Tindall, one of the organisers of the Chiltern Chase, presented a cheque to headteacher Joe Ottaway and Debbie Farrell, who chairs the school’s Friends group. Mr Ottaway, who was appointed in September, said: “The school is very lucky to have money from the Chiltern Chase and have the organisation supporting us.”

Mrs Farrell said: “This is by far our largest fundraiser every year. We have about 50 families with children at the school and there’s only a small pool so something like this is huge for us.”

Mr Tindall said most of the money came mainly from the entry fees paid by the 550 runners who took part in the 5km, 10km and 15km races last year.

He said: “Most of our committee have children at the school and it’s a really nice school. The kids have a good education and if we can help them that’s great.”

He thanked the sponsors, Grundon, Rowse Honey and Hazel & Jefferies.

The committee will donate another £4,257 to the Stroke Association. Over the last 14 years the Chiltern Chase has raised more than £100,000 for charities and the school.

This year’s event will be held on Sunday, June 7 and entries are now open. For more information and to enter, visit www.chilternchase.com

• A seven-week “couch to 5km” training course will be held at Watlington recreation ground, starting on April 22. It costs £40, which includes your race entry fee. Email sarah@smur-fit.co.uk