What a hoot... family find owl trapped in fireplace 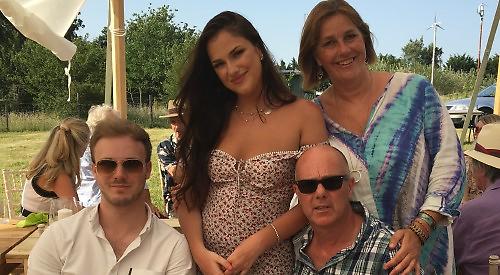 A FAMILY had an unexpected visitor when a tawny owl fell down their chimney and got stuck in the fireplace.

Abi Winfield discovered the bird after hearing bangs and hooting sounds coming from the chimney at her home in Ewelme, where she lives with her husband Chris and daughter Hannah.

She had thought that perhaps an owl was building a nest at the top of the chimney until she found the bird trapped behind a fireplace grille.

The family called the RSPCA who were able to rescue the owl and release it back into the wild.

Mrs Winfield, 57, said: “I was aware over the preceding day or two when I got up in the middle of the night there were a lot of owl noises. I was also hearing them during the day.”

She said her family thought she was “going loopy”, adding: “My son Josh, who’s stuck in London, was sending me emojis and gifs of owls.

“One night at about 9pm I heard a really loud noise which seemed to be coming from our living room. It was startling. I thought ‘I’m going to prove to them I’m not going completely mad’ and I recorded it with my phone.

“I was calling my husband saying ‘there’s an owl’. I assumed there was one creating a nest at the top of our chimney and that’s what we could hear. It didn’t occur to me it was physically in the chimney.

“My husband switched the light on and the sound stopped and we thought it had flown away.

“A couple of days later there was a lot of soot coming down the chimney and I again assumed it was building a nest on top. We thought we would just leave it be.”

Then at about 6am on a Saturday Mrs Winfield heard more noise coming from the living room.

She said: “There was this banging noise and then silence and then banging again and I couldn’t work out what it was. It was really noisy.

“I went into the living room and there was an owl looking at me from behind the grille rather startled and every so often it would do a massive flap.

“I was amazed and then thought ‘I knew there was an owl’. I thought I had proved a point.

“I woke up my husband and daughter and we quietly went to have a look at the owl and discussed what to do.

“We weren’t very keen to lift the grille and open the doors because it could start batting itself against the wall and cause chaos.”

Mrs Winfield called the RSPCA and inspector Lauren Bailey came to the house.

She was wearing personal protective equipment and followed social distancing measures as she recsued the bird with the help of Mr Winfield who lifted the grille slightly while wearing gloves and a mask. The operation took only a few minutes. Miss Bailey said: “The owl had his feet up against the grille like he was waving and asking for help.

“He was very thin and covered in soot so he’d obviously been stuck for some time.”

The owl, which the family nicknamed “Moon”, was put in a cardboard box and taken to Tiggywinkles wildlife hospital, near Aylesbury, where he was cared for and made a full recovery before being released.

Mrs Winfield praised Miss Bailey’s professionalism and adherence to social distancing measures and thanked the RSPCA and Tiggywinkles for their help.

She added: “It was a happy owl story during these difficult times. It added a bit of excitement to our lives.”

The RSPCA advises people to fit chimneys with a cowl to prevent birds from falling down it.

To help the RSPCA rescue animals and keep its animal hospitals and centres running for emergency treatment during the coronavirus crisis, donate via www.rspca.org.uk/covid