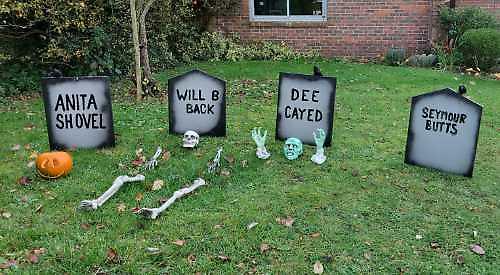 HUNDREDS of children took part in a fundraising Halloween trail around Ewelme.

It included ghosts, ghouls, a skeleton bride, giant spider, tombstones, dolls “boiling” in a cauldron in a front garden, a Dementor from Harry Potter, a tree full of eyes and another filled with heads made out of clay.

The trail was organised by the Friends of Ewelme School and has so far raised more than £1,200.

Debbie Farrell, who chairs the group, said that because of the coronavirus pandemic all the school’s usual fundraising activities, including the Chiltern Chase run, had been cancelled.

The group decided to organise the trail over half-term last week after committee member Rowena Watts came up with the idea. Fellow committee member Catrin Cuzen, a graphic designer, produced a map of a circular walk around the village. There was also a route for parents with buggies.

She also produced three pages of activities for children and these were available at Ewelme Village Store in return for a donation.

Initially, 75 maps for the trail were printed, but these sold out on the first day. More were produced and about 450 maps had been sold by the end of the week.

Six of the stops featured a letter which the children and their families had to find to form a word. Once they had worked this out they could return to the store to collect chocolate as a prize. Mrs Farrell said: “These six stops were marked on the map and the idea was that there were a lot more that they could find.

“As the week went on, villagers started to take part with displays in their gardens and it grew and grew. We were worried that some villagers might not want to take part but all we have had is amazingly positive comments.

“It was covid safe and the overwhelming response from the village was, ‘When are we going to do it again?’ It has been really nice to bring everyone together.”

Mrs Farrell thanked the shop for its support, adding: “We had no idea it would be anywhere near as successful as it was. We’re just so grateful.”

The money raised will be matched twice over by Netflix. To make a donation, visit https://cutt.ly/tgpuJ60