Riders back in the saddle as horse show returns 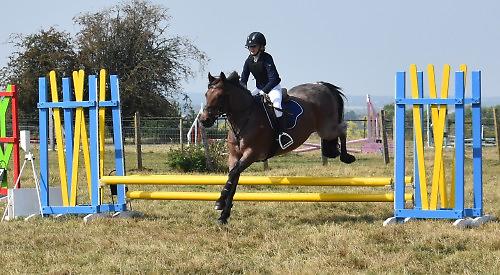 MORE than 200 people competed at the 39th annual Ewelme Horse Show and Fun Dog Show at the weekend.

It was the first time the event had been held since 2019 as it was cancelled last year due to the coronavirus pandemic.

A record crowd watched 160 riders compete in 31 classes in the horse show at Fords Farm in Days Lane.

The highlight was the best decorated mane, tail and toes novelty showing class, which was won by Isla De Wolf with her horse Bele.

The class was judged by Lady Jay, a former High Sheriff of Oxfordshire, and the proceeds from the class will go to Wyfold Riding for the Disabled.

There were more than 100 entries in the show with categories including fastest sit, waggiest tail and best six legs.

The championship trophy, named the Diana Younger Memorial Trophy after one of the show’s driving forces, who died in a riding accident in 2019, was won by Ross Gilbert from RAF Benson.  Catherine Hordern, a member of the show committee, said: “It was fantastic to have the show happening again on what was a beautiful sunny day.

“We had more people attending than we’ve ever had so it was a huge success.

“There are not many small shows like this, designed for novices, and I think that was a big reason why we had so many people.

“We knew people were really looking forward to it as it is a big deal locally. We couldn’t run it last year so for a lot of people it was their first time competing.

“Everyone was so keen to get out and do something that felt normal. There was a real buzz around the place.”

Ms Snowden, a professional photographer from Checkendon, said: “I used to ride years ago but stopped when I was 18.  My daughter Audrey took up riding but she is 15 now and has retired from it so I decided to give it a go and I’ve been riding regularly for about a year now. I’ve been having lessons and that really helped me to improve.

“Winning at a traditional show like this felt really good and it’s a bit of a dream come true. When I was young I did win occasionally but not very often. Competing and winning at a local show when I’m nearly 49 felt like a really happy time.

“I want to say a big thank-you to the organisers who managed to run a great show.”

The full horse show results were as follows: