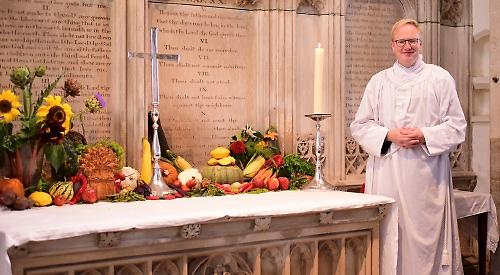 A FLOWER festival with a theme of “Combined harvest” was held at Ewelme Church.

Fifteen arrangements featuring flowers, fruit and vegetables were on display at St Mary the Virgin.

About 150 people visited the weekend event, which was organised by a team of flower arrangers and the Friends of Ewelme Church, which raises money to maintain the building.

More than £1,500 was raised from donations and the combined £2 entry fees. Deborah Whitfeld, who chairs the Friends group, said: “It has been years since a flower festival has happened in the church. It was an extremely successful event and the church looked absolutely amazing.

“We can’t be sure of exactly how many people came because some were very generous and just said to keep the change.

“We all do this for nothing but there is a cost for the flowers and advertising.

“We had a group of flower arrangers, who already do the flowers for the church and three of them happen to be on the committee as well.”

On the day before the festival, a talk was given at the church by Martin Cook, a three-time gold medallist at the Chelsea Flower Show.

A harvest festival service on the Sunday was given by Rev Patrick Gilday, the rector of the Benson with Ewelme Benefice.

Mrs Whitfeld, who has chaired the Friends since the group started 11 years ago, said: “The talk by Martin was absolutely fantastic. His designs are simply stunning.” Villager Angela Smailes, who helped co-ordinate the arrangers and has several small displays of her own, said: “We have never done anything on this scale before.

“It does take a lot of effort and it costs more than you would expect.  A lot of the arrangers were very generous and used their own flowers.

“I think it was so successful because we have not had one before and the church has been closed for a long time. I would like to see it happen again because it was such a success.”