New food festival organisers to serve up another helping 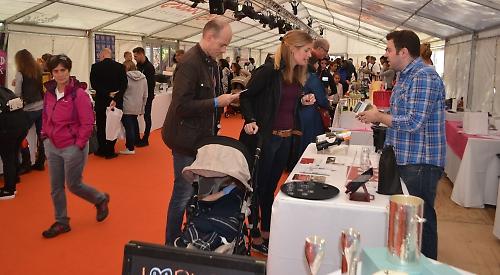 HONEY, gin and cheeses were among the goods on offer at the Henley Food Festival.

Local chefs, farmers and producers took part in the new event, which was held in the town centre on Saturday and Sunday.

Hundreds of people visited despite road closures on the main roads into Henley from Reading and Marlow and no trains running on the Henley branch line for most of the weekend.

There were more than 20 exhibitors in a marquee in Falaise Square, including Honeys of Henley, run by Nigel and Jo Eddon, and Mr Hobbs gin, which was founded this year by Jonathan and Suzy Hobbs, of boat hire company Hobbs of Henley.

Digby Fine English, which produces an official pink wine for Leander Club, also had a stall, as did Louise Foers, who makes cupcakes in Hambleden under the name Gourmet Gob.

Other local companies included the Loddon Brewery, Chiltern Cold Pressed, Gelato Henley and The Granary, from Watlington. The Henley Allotments Association sold fruit and vegetables and Peppard charity Greenshoots, which provides rehabilitation and training for adults with mental ill-health or a learning disability, had a plant stall.

Cooking demonstrations were given in the town hall by Great British Menu chefs including Ryan Simpson, of Orwells restaurant in Shiplake, and Shaun Dickens, of The Boathouse in Henley.

Mr Simpson, a patron of the festival, cooked both hare and mallard, explaining to the audience how to cut and season the meat. Mr Dickens made scorched mackerel with potato crumbs, pickled turnip and charred water melon. He demonstrated how to cut and de-bone the fish before using a blow torch to scorch it and frying it.

The chefs were filmed as they worked and the footage was broadcast live on big screens in the room, so the audience had a close-up view and could ask questions.

Liam Trotman, Mr Simpson’s business partner, interviewed the chefs about their food and businesses during the demonstrations.

Other exhibitors in the council chamber over the weekend included Rob Scott, owner of Hare Hatch Sheeplands garden centre, near Wargrave, who brought along some edible succulent plants and homemade scones with jam and clotted cream.

The festival was in aid of the Alexander Devine Children’s Hospice in Maidenhead, which is due to open later in the year.

It was organised by Kathryn Fell, a professional photographer from Sonning Common, and Tracey Pryce, from Stoke Row, who runs an events company.

Mrs Fell said: “We are delighted with the feedback we have had from visitors. They were very impressed with the high calibre of producers and enjoyed the demos.

“The main goal was to support local business and trade and we tried to use local providers where possible for things like the marquee and fencing.

“The exhibitors enjoyed being in the marquee, saying it was friendly and had a community atmosphere.

“We have worked on this for two-and-a-half years without taking a penny to keep costs down. It has taken a lot of perseverance and there were a lot of hurdles to overcome.

“We were also doing it during the high season for my photography business and Tracey’s events so it was some undertaking!”

Mrs Fell said the festival would be held again next year.

“We want to grow it,” she said. “We’ve had amazing support from friends and family and I’d like to say thanks to all the exhibitors, staff and suppliers.

“There’s lots of food for thought — pardon the pun — and we might change the model next year.”

Mayor Kellie Hinton, who attended the event on both days with her daughter Hallie, seven, said: “I thought it was really good. I was especially excited about the demonstration by Ryan Simpson and he didn’t disappoint.

“It’s a good thing to bring people to the town, although it would have been nice if the trains had been working!”