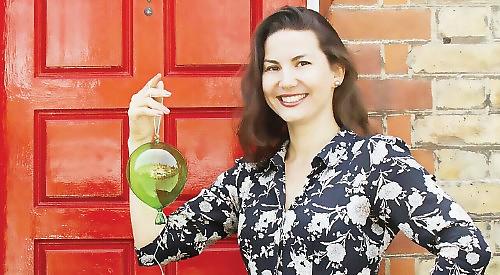 CHRISTMAS in Henley will officially begin at 7pm tonight (Friday) when the lights of the 30ft-tall Nordmann fir in Falaise Square are switched on by Mayor Kellie Hinton.

Assisting her will be 11-year-old Lottie Baker, a pupil at Valley Road Primary School who won the Mayor’s Christmas card design competition.

The big switch-on is one of the highlights of the annual Christmas festival, which runs from 5pm to 9pm and will see the town centre closed to traffic from 4pm to 10pm.

With hundreds of people packing the square, it will be followed at 7.10pm by carol singing around the tree, with music from the Woodley Concert Band.

Some of the children present may innocently wonder why a brightly decorated tree is used to celebrate Christmas. They may even turn to ask their parents.

“It’s traditional — we do it every year,” would be one reply.

So we do. But for the next few days, just around the corner from Falaise Square, there is somebody in town with a slightly fuller answer to that child’s question.

Margarita Vul, a mixed media artist based in Windsor, is the curator of a Christmas ornaments exhibition and pop-up museum that is running at the Old Fire Station Gallery in Upper Market Place until Tuesday (December 5).

As she explains, the event — which has been held at the venue for the past four years — doubles as a Christmas ornaments fair where visitors can buy decorations for their own trees or as gifts.

“The fair is dedicated to Christmas tree decorations,” she says. “No other Christmas-related items are on display or for sale.

“What I do is I set up a white forest where my handmade trees display various ornaments. Visitors browse and pluck ornaments straight from the branches.

“We also have a museum collection of rare original old Christmas decorations with explanations and a story about each of them.

“It is an incredibly educative display where everyone can learn a lot of new things about their own Christmas traditions.

“This year we will start archiving people’s memories about their childhood Christmas trees and visitors in Henley are encouraged to share their stories.

“It is fascinating how one tiny seasonal object has the ability to reflect sentimental personal stories as well as the history of a whole nation.

“The museum display contains most significant tree decorations from around Europe. Visitors learn why we decorate a tree, when and where did the tradition start, and what were the first Christmas decorations made of.”

Margarita, who has previously lectured on the history of Christmas ornaments, adds: “The idea is that people don’t know why they decorate a tree at Christmas. Why there are mushroom ornaments, for example? Where did the tradition start and what were the prototypes of baubles, beads and stars?

“As an artist and curator, I create an interpretation where we get closer to the origins. The focal point is not just Christmas but the season. Winter changes everything in nature except for the fir tree — and that is where the story begins.”

According to Margarita, 32, who was born in Estonia when it was part of the Soviet Union, Christmas trees as we know them today derive from an ancient European pagan tradition that originated in places where “the winters are so tough that you would really hope for the spring to be back”.

She continues: “Looking into colder regions, I have tracked down this cult of worshipping an evergreen tree to Karelia, which is now in Russia, and northern Finland.

“There were many customs with the trees, including gift-giving, decoration and cutting branches.

“Perhaps the decorations — apples, mushrooms and berries — were gifts to a deity or marked a milestone. These are indeed the last foods you can collect in autumn.

“The fir tree marked the season everybody waited for — the green season with its food sources.

“We don’t know how exactly because back then people didn’t write things down and most of the cultural heritage was passed down verbally.

“Then Christendom arrived and tried to stop people decorating trees. The priests did not succeed, so they gave a new interpretation to the custom — apples as fruits of paradise, and so on. The baubles we have on our trees now.

“There was also a conflict between paganism — particularly Mithraism — and Christendom. Those guys made Mithras’s birthday on December 25 into Jesus’s birthday — who was actually born on August 21 — and his symbol of the sun on top of the tree gradually changed into the Bethlehem star.

“Interestingly, there are many people who tell me about having the sun and not the star as their tree topper back in their childhood. Some things die hard, I guess.”

Such was to prove to be the case with Christmas decorations, even in the early days of the USSR.

“This year marks the 100-year anniversary of the Russian revolution and we will display some important pre-revolutionary and Soviet artefacts,” says Margarita.

“We will show how the banned Christmas tree made an amazing comeback in a new society with no place for religion.

“The USSR actually prohibited Christmas and had serious atheistic propaganda. Nevertheless, the USSR produced a massive amount of ornaments — most of which are collectible today — and which had a new mission in that society.

“Documents reveal that there was a shortage of ornaments after they were ‘allowed’ again in 1936 after almost 10 years of banning workshops and chasing religious celebrations. In fact, there was a whole scientific research institute working on Soviet toy design and tree decorations had their comeback as tree ‘toys’.

“They realised that a tree ‘toy’ had a valuable potential to form Soviet minds and promote Soviet ideology.

“And by getting a new interpretation, the tree decoration tradition survived again.”

Margarita, who has lived and worked in England for the past seven and a half years, says she devotes at least 50 per cent of her time to her Christmas project.

“I love trees — painting them as well as making 3D art related to them. I also create Christmas ornaments using half-forgotten techniques such as traditional papier mâché and spun cotton.”

Her first Christmas Ornaments Fair was held in a hotel function room in Windsor six years ago.

“I heard quite a lot of people saying ‘Christmas has lost its spirit’ and that they dislike the season because they are overstimulated with shopping.

“So I decided to create an event where there’s more meaning and intellectual content and where visitors would feel different. Because I knew how! I had a vision in my head and it worked out.

“A couple of years later I found a beautiful gallery I could rent from Henley Town Council — it was perfect for my installation and the atmosphere I wanted to create.”

• The Christmas ornaments exhibition and pop-up museum, which began yesterday (Thursday), runs until Tuesday at the Old Fire Station Gallery. Opening hours are 10am to 7pm today and tomorrow, 10am to 6pm on Sunday, and noon to 6pm on Monday and Tuesday. Entry is free. For more information, visit www.christmasornamentsfair.co.uk