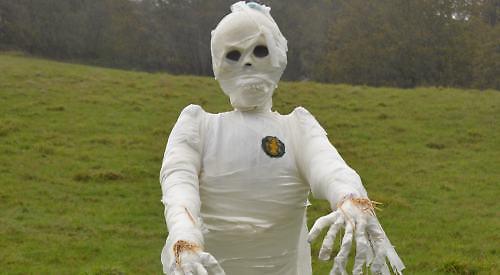 CHILDREN got into the Halloween spirit by delivering scarecrows to Stonor Park.

They were invited to enter a competition to create the spookiest scarecrow with the winning entry receiving a Christmas tree from the Tree Barn in Christmas Common for their school.

Seven schools entered and the winner was an Egyptian mummy scarecrow made by St Peter’s Primary School in Marlow. Year 5 and 6 pupils at Caversham Preparatory School made a headless highwayman scarecrow called Brian, which took them three hours.

Heidi Ray, head of juniors at the school, said: “We had a school council meeting and decided what we wanted our scarecrow to look like.

“We had some big ideas, so we had to scale it down to something more achievable. It was going to be a headless horseman, but we decided to go with a headless highwayman instead.”

It was the first time that Stonor Park had held the competition.

Marketing manager Jane Lee said: “This competition is such a nice way to work with our local schools. Every scarecrow was really well thought out. You could see the amount of work that had been put into them and it was a very close call when it came to voting.

“This is a community initiative, which gives the children something to be proud of, while at the same time getting to see Stonor Park.