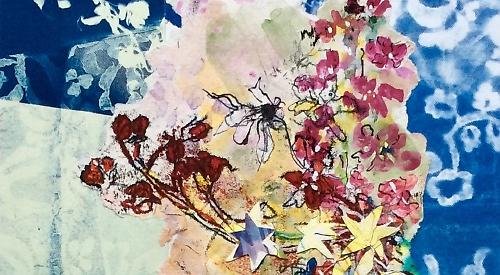 AN exhibition celebrating the life and career of George Harrison is being staged at the Old Fire Station gallery in Henley.

Here Comes the Sun, Harrison in Henley has been compiled by members of the Reading Guild of Artists and will run from next Friday to March 16.

It will feature about 80 pieces of various sizes, from wall hangings to smaller pictures to view on a table. There will be etchings, monoprints, collage, oil and watercolour paintings and three-dimensional pieces.

The works will focus on Harrison’s career as a musician and singer-songwriter with the Beatles, with whom he wrote, among others, Here Comes the Sun.

They will also reflect his love of Indian culture and instrumentation, his Hindi-aligned spirituality and the love of his home and garden at Friar Park in Henley where he lived until his death in 2001.

Artist Carol Stephens, who is part of the organising committee, said: “We wanted to have a Henley theme as the exhibition is based here but we didn’t want just the regatta, the river or for it to be based on a festival.

“One of our group is a Liverpudlian and he suggested George Harrison who lived in Henley but had wider interests. He did a charity concert for Bangladesh and also had an interest in cars, landscapes and he was spiritual.

“We wanted as broad a theme as possible and there is a range of works. One piece is an aerial view of Harrison’s garden, while others have incorporated lines of his songs in some way.”

The exhibition will be opened by guild president Clive Duncan, of Station Road, Shiplake, who knew Harrison.

He said: “In the late Eighties I used to go to the Baskerville and occasionally George Harrison would be there.

“On one occasion, for some reason, we got talking. We must have been talking from about 7pm to kicking out time and the conversation got deeper and deeper.

“He was a very clever musician but there was also a great depth to him. He had this spiritual, philosophical and poetical link and he loved his house and the garden. He was a great plantsman who planted herbaceous plants.

“Peace, love and joy was what he brought to his music with the Beatles but when they split up, they all continued to produce work with a message.

“Some of George’s music was quite dark and complex and I am told by people who know about these things more than I do, that his pieces are difficult to play.

“He once said he played all the notes that aren’t there. Because of his Indian music knowledge he could hit a sound that’s not a note you would recognise in western music. It crept into a bend — he gave the listener some breathing space — so it was unique and allowed interpretation.”

He added: “To have an exhibition with him as the theme is fun as it gives our members a broad spectrum of things to work from. It is a great privilege to be president at this time, which is also the guild’s 90th year.”